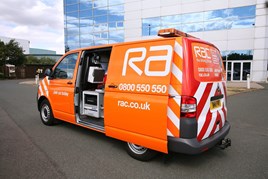 RAC Business has launched a new feature as part of its Onward Travel cover, as research reveals the cost of a vehicle being off the road is up to £500 a day for one in three small businesses.

In response to customer feedback, the new feature will ensure a customer’s broken down van will be temporarily replaced with another van, if it is not possible to fix the original vehicle at the roadside.

The enhanced Onward Travel service means that wherever the van is, the driver will be able to transfer their load to the van replacement and carry on their journey, while their vehicle is repaired in an RAC approved garage.

The van for van replacement service is one of a number of new features now available a year after RAC Business Club was first launched, which currently has more than 8,500 members from across the UK SME sector. For a limited period only there is 50% off Onward Travel when you buy RAC Business Breakdown cover.

RAC Business spokesman Mike Fogden said: “Businesses need to keep on the move and the new change we have made to our Onward Travel cover means they are able to transfer their load into a van replacement, and carry on to their job or make their delivery.

“We have seen the number of vans on our roads increase significantly in recent months, which is a good sign that businesses are getting busier.

“In April, according to the Department for Transport, new van registrations increased for the 12th consecutive month to 24,927 - up 20.9% for the year-to-date.

“The number of vans has continued to rise at a higher rate than any other vehicle type, with around 3.5million currently on our roads, doing the job of keeping the British economy on the move.”

Research carried out by the RAC during Q1 2015 suggests small firms are losing thousands of pounds a year unnecessarily, as trade is being lost when vehicles are sitting idle waiting for repair.

With the average small business running six to seven vehicles just one day off the road a year, for each vehicle in the fleet, could cost up to £3,500, it says.

But the cost could be even higher for a significant number of firms as 33% of those in the survey said they did not even know the financial impact on their business.

Fogden added: “Obviously for the vast majority of small firms vehicles are an essential part of their operation and contribute to the income generation of the business, and we have seen an increasing use of vans and commercial vehicles in those businesses.

“This clearly demonstrates that being out of action due to breakdown can have a significant impact on the cash flow of a business which is why we are launching this new feature to help keep their business on the move.

“Over the past year we have seen thousands of small and medium-sized businesses signing up for free to become members of the RAC Business Club.

“During that time we’ve been adapting and developing new services in response to what they say makes running their businesses easier, from a vehicle management point of view.

“This is where we can bring our expertise and experience in motoring services, allowing  business owners to focus on what they do best, which is running their business.”

Another useful feature included with Business Club is Fleet Assistant, which brings a number of existing services and functions into one, easy-to-manage process.

Members can now use the Fleet Assistant to set up reminder alerts for servicing and MOTs as well as ordering parts such as replacement windscreens and tyres, and to find out information about meeting Duty of Care commitments.