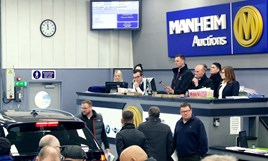 The increase in the average selling price was likely helped by the average age of stock being 47 months – two months younger than July 2015 and a drop of four months from August 2014. Average mileage was also down, 2.3% (1,304 miles) month-on-month and 7% (4,220 miles) year-on-year. The average de-fleeted car had 55,927 miles on the clock, which is the lowest recorded for at least 12 months.

Manheim’s auction volumes were dominated by medium family cars and small hatchbacks, which made up 31% and 22% of stock, respectively.

Month-on-month stock age was down six months for superminis and seven months for small hatchbacks, and was 10 months younger year-on-year for both segments.

Daren Wiseman, valuation services manager at Manheim, said: “Younger, lower mileage ex-fleet cars are still finding buyers very easily in the used market. The quality of Manheim’s de-fleeted stock is attracting buyers both in-lane and online, helping our fleet vendors to achieve excellent prices. We may see lower growth in values as volumes increase over the next four to six weeks as expected.”

“Low-mileage superminis and small hatchbacks have particularly broad appeal, from owners of larger cars looking to downsize to younger drivers choosing their first car. While de-fleeted MPV values were fairly static compared to July, the year-on-year upward trend was seen again in August, with average selling prices up 15.2% (£1,120), helped by mileage being 12% (8,869 miles) lower than the previous month.”