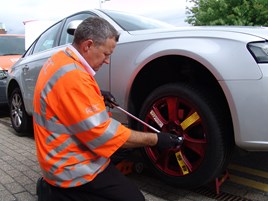 Not having a spare wheel meant 62,000 fleet drivers were left stranded at the roadside last year – the equivalent of more than 160 drivers a day - according to new figures from RAC Business.

The analysis of breakdown statistics among RAC Business’s fleet customers also found that company car drivers are six times more likely than private car owners to be stuck with no spare wheel after getting a puncture. In 2014 12% of fleet drivers suffering a puncture were without a spare tyre, compared to only 2% of private drivers.

Last year, wheel changes accounted for one in four (24%) of all RAC Business call outs and are consistently the most common reason for company car drivers needing roadside assistance.

The increase in the number of company car drivers getting stuck is almost entirely due to the fact that the vast majority of new cars, nine out of ten, are now sold without a full-size spare tyre. This is in order to reduce the weight of the vehicle and comply with EU-wide regulations on emissions. Only a quarter of manufactures provide the smaller space-saving tyre and around half simply put a puncture repair kit in the boot of new cars.

However, a Fleet News poll of fleet decision-makers last year revealed an overwhelming majority (74.3%) would prefer to have a full-size spare wheel.

RAC Business estimates that by 2018 it will be dealing with in excess of 100,000 PNS (puncture no spare) call outs every year, a 60% rise from current levels.

At the start of 2014 the RAC responded to the change by equipping all of its patrols with a universal spare wheel, which can be fitted to more than 90% of car models and will allow drivers to safely reach a garage for a speedy repair.

Jenny Powley, sales director corporate business, RAC Business said: “The move away from spare wheels in the boot brings clear environmental and fuel-saving benefits. However, it’s obvious from these figures that fleet drivers are particularly prone to finding themselves stuck at the side of the road with only a puncture repair kit to help them.

“Most people are unlikely to try to fix a puncture at the roadside, especially if they are on a schedule and have a breakdown. The benefit of the universal spare wheel means they are able to get back on the road with minimum disruption, and arrange for a puncture repair at a time that is more convenient to them.

“The discrepancy between the PNS figures for private and company drivers can be explained by the fact that fleet drivers are far more likely to be behind the wheel of a new car than those who drive private cars. But also on average fleet and business drivers are doing many more miles every year.”

In a separate study by RAC Business earlier in the year,  it was revealed that it costs small businesses up to £500 a day in lost revenue as a vehicle sits idle waiting for repair.

Powley added:  “Delays are costly and inconvenient and, as always, we aim to help stranded drivers get on their way with a minimum of fuss. A flat tyre can be expensive as well as inconvenient for companies running even a small fleet of vehicles.”