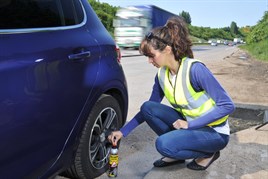 The disappearance of full-size spares is having serious consequences for fleets, in terms of reduced productivity and costs for replacement cars, and even hotel stays.

“We are going to about 300,000 wheel- and tyre-related breakdowns a year, and more than half the vehicles do not have a serviceable spare wheel,” says Phil Ryan, technical director at RAC. “Three years ago that figure was negligible.”

The RAC has developed a universal spare wheel so its patrols can mobilise any stranded vehicle, but Ryan still regrets the disappearance of a proper spare wheel.

“Manufacturers have done a fantastic job of reducing CO2 emissions and removing the 20kg weight of a spare wheel is tempting, but it’s not a great development from a customer service point of view,” he says.

For Liz Hollands, fleet and facilities manager at the Freight Transport Association (FTA), which has a 200-strong car fleet, the difficulties drivers have experienced with tyre repair kits – “we discovered they do not work very well” – have directly influenced the FTA’s car choice list. All cars must be ordered with a spare wheel, and if the model does not have a well for a spare, “it gets knocked off the list”.

“We were losing time and productivity if a driver had to hang around for a breakdown patrol and then get recovered to a tyre depot which might not have the right tyres in stock,” says Hollands.

Deselecting makes and models from the choice list is not an option for Heather Gaunt, fleet administrator for Vaillant Group’s 170 cars, due to the company’s pan-European fleet sourcing arrangements, but the absence of spare wheels is increasing vehicle downtime and driving costs skywards.

“We have people all around the country and if they have a puncture we’re finding it increasingly difficult to get the vehicle repaired,” says Gaunt.

The majority of the company’s cars use run-flat tyres, with no spare wheel, “but we are finding fewer and fewer tyre depots are stocking the right tyres, and they cannot get a replacement until the following day”, she adds.

This results either in cancelled business appointments or the additional cost of hiring a replacement car and potentially a hotel charge for the employee if the car is stranded in a fast-fit garage awaiting a replacement tyre, far from the driver’s home.

The availability of suitable replacement tyres is an issue that’s not restricted to run-flats, however, as Jamie McWhir, Michelin’s UK technical manager explains.

“The complexity and diversity of tyre ranges is now vast. We work very hard with the major chains to improve their stock profile.”

It is a challenge that leasing and fleet management companies are working to resolve.

“We have had to put mechanisms in place to ensure this works efficiently – for example, when the incident is reported and a tyre is needed, we need to check locations for tyre availability in advance.

“Simply recovering to the nearest centre may not yield results, because there may not be a suitable, appropriate tyre available.”

To overcome the complications of tyre availability, Wiltshire Police orders all its new cars with a full-size spare wheel, even if this means the spares may be stored in one of the force’s garages because there’s no longer a well to accommodate the wheel in the car.

“The alternatives of a space-saver or repair kit simply don’t work for operational vehicles – a patrol car can’t be restricted in its speed or distance,” says Steve Botham, fleet and services manager at Wiltshire Police.

With many of his vehicles operating around the clock, Botham expects at least a puncture a day across the large rural county.

“If a vehicle has a spare wheel we expect the officer to change it,” he says. But if there’s no spare, “the officer has to wait with the vehicle. You cannot have a police car stuck anywhere”.

It’s a frustrating waste of police time, when resources are already stretched.

Botham adds that run-flat tyres work well on his fleet’s BMW 5-Series and X5 models, allowing punctured cars to be driven back to one of the force’s workshops, but the tyres are proving to be expensive because they are not repairable (his workshops will repair only the tyres of low performance cars with neither blue lights nor sirens).

Remember, too, that whatever the roadside solution to a flat tyre, it’s never the end of the issue.

“Whether the vehicle carries a full-size spare or a repair kit has been used or a spare tyre fitted, there is an equal need for follow-on tyre work in either a centre or by mobile,” says Peter Lambert, fleet director at Kwik Fit.

A full-size spare simply allows a driver to plan this work more at their convenience.

Finally, while any flat tyre is disturbing and disruptive to a driver, McWhir helps to put the issue into context.

Across Europe, he says, tyres have longer lives on the road. Cars typically travel 75,000km (47,000 miles) between  punctures, so there’s a high chance that the majority of fleet vehicles will spend their three-year working cycle without suffering a flat.

Tyres are a focal point in drive for efficiency

Over the past 20 years, tyre sizes have become much bigger – and that’s an issue. The average new tyre is now 33% wider and has a 23% greater diameter than in the early 1990s. This means a full-size spare wheel is now significantly heavier and  occupies much greater space than two decades ago, twin developments that run counter to environmental obligations, design opportunities and financial pressures facing vehicle manufacturers.

The weight of a vehicle has a direct bearing on its fuel efficiency and, consequently, its CO2 emissions. So the opportunity to shave 15-20kg from a car by replacing a full-size spare wheel and jack  with a lighter alternative is  highly tempting.

Moreover, the absence of a full-size spare wheel frees up  the space once set aside for a wheel well.

This is increasingly redeployed to accommodate AdBlue emissions control equipment, which helps vehicles comply with the new Euro 6 regulations.