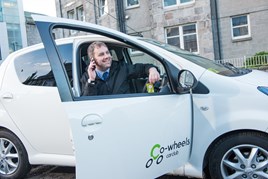 Co-wheels Car Club has won its first listing on the Crown Commercial Service framework, as part of a new agreement for vehicle rental.

The overall agreement is anticipated to save customers over £19 million, and one of the six 'lots' covers car sharing - in which Co-wheels has achieved its listing.

Pierre Fox, commercial director at Co-wheels said: “We are delighted to be included on the Government’s preferred supplier list for car club schemes.  We are the only independent supplier on the list and one of only two SMEs, which is a great achievement. This quicker and more direct tendering mechanism will really help the growth of car club schemes across the UK making it easier and quicker for public sector organisations to contract directly with us.  Because Co-wheels operates as a social enterprise -  the only car club on the supplier list to do so – we are not only able to offer community car clubs and pool car schemes for cities, but we also provide car clubs in rural areas and locations where there is a real need for affordable transport alternatives.

“More and more people are seeing car sharing as a convenient and low cost alternative to car ownership. When people sign up to a Car Club, they benefit from the flexibility of being able to book a car on a “pay as you drive” basis with none of the hassle of car ownership, parking or having to pick up keys from a hire company’s offices.   People experience all of the benefits with none of the hassle of owning a car.”

Co-wheels has already successfully won contracts with 16 local authorities including Aberdeen, Derby City and Glasgow, supplying over 100 cars to schemes in towns and cities across the UK, in addition to its large pay-as-you-go fleet.

The new agreement will help to cut down lengthy tendering processes and is part of a drive to kickstart uptake of car club membership in the UK.