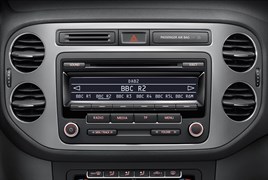 Nearly three-quarters (74.1%) of new cars are now fitted with digital radio as standard, minister for culture and the digital economy Ed Vaizey has announced.

He made the announcement at Radio’s Digital Countdown, a radio industry conference attended by more than 200 broadcasters, manufacturers, retailers and industry stakeholders, described the progress made by the vehicle manufacturers.

Additionally a further 7% of all new cars offer digital radio as an option which means that over 80% of cars (81.2%) are available with digital radio.

The top 10 new car models sold in September all have digital radio fitted as standard (see chart below).

The UK Government has set coverage and listening criteria for a future radio switchover, while Norway has become the first country in the world to set a timetable for radio switchover (the end of 2017).

That fact that digital radio is now available in more than 80% of new cars is testament to growing consumer demand for these technologies, and we expect uptake to continue rising in the coming months and years.”