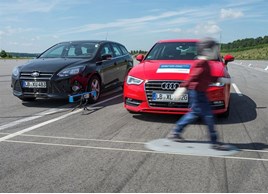 The effectiveness of the different technologies will be featured in driving demonstrations at the initiative’s launch event in Brasilia from 17-19 November.

“Stop the Crash” also supports the United Nations in its aim to halve the number of traffic fatalities worldwide − currently 1.25 million per year − by 2020.

“For Bosch, every traffic fatality is one too many. With our technologies, we can protect human life around the world,” said Dr. Dirk Hoheisel, member of the Bosch board of management.

Since Bosch launched the ESP electronic stability programme in 1995, it has prevented 190,000 accidents and saved more than 6,000 lives across Europe.

“After the seat belt, ESP is the most important vehicle safety system − even more important than the airbag,” Hoheisel said.

Global NCAP is calling upon UN member states, especially those with a significant vehicle manufacturing industry, to mandate ESP for all new vehicles by 2020. The World Health Organisation (WHO) is also calling for legal regulations to mandate ESP. A large number of human lives around the world could be saved as a result. Outside the EU, the anti-skid system is now also mandated in Australia, Canada, Israel, New Zealand, Russia, South Korea, Japan, Turkey, and the United States.

According to EuroNCAP, AEB technology has already reduced the number of rear-end collisions by 38% since its introduction. The system is most effective at low speeds (up to 25mph) where three quarters of accidents take place. It is believed that AEB can reduce the occurrence of these collisions by 20%.

Thatcham Research claims that if all cars were fitted with AEB today, it would result in 17,000 fewer deaths and serious injuries by 2025.