Aggressive drivers provoke others to behave in similar fashion 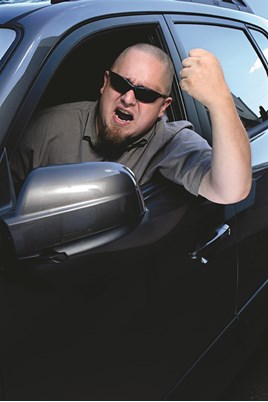 More than half (55%) of drivers admit that when irritated or provoked on the road by one driver, they may be more likely to take it out on a different driver, according to a recent survey by Goodyear and the London School of Economics and Political Science (LSE).

The research (composed of a qualitative survey using focus groups and driver interviews in the UK and Italy, as well as of a quantitative online survey of nearly 9,000 drivers in 15 countries) found that drivers’ choices of behaviour on the road trigger a 'ripple effect'.

Aggressive driver behaviour can prompt others to drive more dangerously – even if they would not otherwise be considered to be problem drivers.

On the flipside, courteous behaviour can positively influence others with 87% of drivers agreeing that another’s considerate driving can prompt them to be considerate to a different driver later on during their journey.

“Road etiquette matters to drivers,” said Chris Tennant, of the LSE, who led the research project. "Reviewing video scenes of interactions on the road, the majority of surveyed drivers all affirmed the importance of gestures of thanks, with fewer than 10%, typically, denying the importance of such acknowledgements.

"In interviews, drivers readily admit that when one driver neglects to say thank you, they are more likely to drive assertively in the next interaction. The study found a whole range of behaviours likely to antagonise others, from merging tactics at busy junctions to tailgating, and from poor signalling to motorway lane discipline. Yet in interview, drivers acknowledge that they perform these same behaviours themselves, usually inadvertently, potentially initiating the ripple effect of negative interactions."

Olivier Rousseau, Goodyear vice president consumer tyres, Europe, Middle East and Africa, said: “The road is rarely seen as a social setting, particularly one wherein good manners should be used. In fact our road safety research shows that many drivers can see other cars on the road as anonymous machines, and not as vehicles containing another human being.

“We urge drivers to remember what strong effect their own behavior has on the behavior of others. Our study suggests that aggressive and combative driving behavior by one driver can initiate a chain of reactions between other drivers and eventually cause a dangerous situation or even an accident some time later while the originator has already moved on. It is up to all of us to stop this ripple effect on the road."

There are only a few ways to be polite on the road but those few ways are very powerful, according to Tennant.

"Allowing others to progress in busy traffic, making eye contact and visibly saying thank you when others let you progress, apologising when you impede others – all these oil the wheels of a considerate driving culture from which we all benefit reciprocally,” he said.