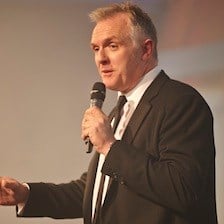 Comedian Greg Davies has been confirmed as the evening entertainment for next month's Fleet News Awards.

Davies has played William Shakespeare (on CBBC) and WG Grace (for Channel 4’s cricket coverage), but is probably best known as the imbalanced head of sixth form Mr Gilbert in the BAFTA winning school sit-com The Inbetweeners.

His Inbetweeners role was apt, as he spent thirteen years as a teacher before taking to comedy. The career switch worked, and he first found success with the acclaimed sketch group We Are Klang. The trio were nominated for the Edinburgh Comedy Award and went on to their own series on BBC3.

As a solo performer Greg’s routines cover everything from his family, his career as a teacher, his new-found TV fame, his 6’8” stature, life, relationships and people, with a combination of intelligence, wordplay and glorious, infectious silliness.

The awards will be hosted by Katie Derham, former anchor on ITV News, and now host of arts programming on BBC Radio.