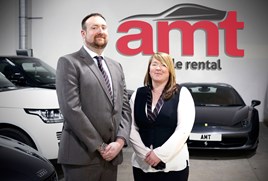 AMT Group, which is headquartered in Leeds, has invested in a new rental facility in central Birmingham to better serve corporate and private customers in the West Midlands.

Moving from its former location in Nuneaton, the new site is the former Jaguar Land Rover car dealership in Erdington which benefits from easy access to the Midlands transport networks. As well as a glass fronted showroom, it includes a full customer reception, an indoor valet area, customer parking and houses a fleet of 130 vehicles.The new site has created 10 jobs.

AMT has seven locations from the South East to Scotland, including a new facility in Stockport Manchester which opened in December with the aim of developing rental markets in the North West, including giving improved access to Manchester and Liverpool airports, while also supporting its growing operation in Yorkshire.

This followed the £2 million relocation of the company’s headquarters in March 2015 when it moved its 45 head office staff from Morley into a new 52,000sq ft building on a two acre site on Armley Road with capacity for 120 vehicles.

These latest investments form part of AMT's ambitious plans to expand and upgrade its nationwide network, focussing on improving customer accessibility from major cities and airports.

Neil McGawley, managing director of AMT Group, said: “Since launching 21 years ago, we have seen tremendous growth within the niche prestige and specialist vehicle rental sector and with more than 1,500 vehicles, we have built up one of the largest independent fleets in the UK.

“As demand from both the corporate and leisure markets continues, we have embarked on an ongoing programme of strategic location development to ensure that we are best placed to serve customers nationwide.”