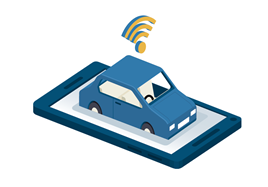 An increasing number of telematics firms are targeting fleets with app-based systems rather than a traditional ‘black box’.

Providers argue that using an app instead of hardware removes the need for vehicle downtime to allow fitting to take place.

Fitting a telematics unit generally takes between 30 and 60 minutes, but a vehicle and driver may need to be out of service for half a day to wait for the engineer.

Trak Global, the latest company to launch an app-based mobile telematics system, is convinced that the removal of downtime will appeal to many fleets.

“It places visibility of data right in the hands of the driver. If they can see how they are scoring, and there is relatable feedback, they are more likely to act on it.”

In addition to driver scoring, the system incorporates a mileage capture and export function to allow easier expense claims.

Brown-Allan continued: “We expect the service to be as useful to a company with six vehicles that has never had telematics, as it will be to those who are looking for a lower cost solution.”

He is expecting strong interest from the company car sector due to the easier set-up process. Trak Global says it will target “tens of thousands” of users in the next 18 months, which it added was a “low ball” forecast.

Brown-Allan said: “You only have to look at the industry at the moment, and you see we are not the only company saying apps are the future of fleet telematics, and they will be saying that for all the same reasons we are.”

Aldo Monteforte, chief executive at The Floow, which provides consumer app-based telematics systems to insurers including Direct Line, explained that using an app isn’t ideal in all cases, but it has a number of benefits.

“If you’re interested in the behaviour of your end user, and not in the collection of every single journey made, the smartphone will give you a very good representation,” he said. “Statistically, it will sample a very high proportion of relevant journeys.

“If what you are after is the unequivocal collection of any journey undertaken in a particular vehicle, we would definitely advise the installation of an embedded telematics system.”

Monteforte says the technology is capable of detecting different journeys undertaken across different modes of transport.

“We have created a lot of powerful data science that allows us to approximate the relevant journeys,” he said.

“The software can already identify journeys on a train, aeroplane and bicycle or when someone goes for a jog,” he added.

Trak Global’s system identifies when the correct vehicle is being driven by monitoring Bluetooth pairing with the car’s multimedia system, which avoids some of the confusion that could be caused by passenger journeys.

However, despite the lower cost of entry and driver benefit engagement, some claim a data gathering app isn’t the best solution.

Paul O’Dowd, head of sales at In Car Cleverness,  said that although the technology had advanced, fleets should investigate an app-based data capture system with caution.

“A mobile phone will rely on GPS, for which there are still blackspots where you are not able to get a signal from a satellite to give you that data,” he explained.

“An OBD-based device that plugs into the vehicle directly is constantly recording speed. You may otherwise not have any data from a moment in time where there was a severe accident and the police want to use the information to investigate.”

O’Dowd said that recording driver data with an app was better than capturing no data at all, but said it was best suited to viewing and accessing data from a device installed directly in the vehicle.

“A mobile phone is not built for recording driver data,” he said. “You are also reliant on that device being present and working all the time.”