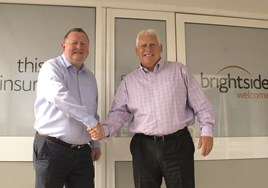 National Windscreens has become the preferred supplier for all glass claims across the whole of Brightside’s motor book in a new three-year contract.

The new deal, which will see National Windscreens manage the whole process, including first notification of loss and third party claims, came about following changes to Brightside’s panel, which freed up greater volume and enabled Brightside to negotiate improved terms.

Mark Cliff, Brightside executive chairman, said: “Following changes to our business we took the opportunity to tender the contract, and were pleasantly reassured that National Windscreens were the strongest candidate still.”

Cliff also said that National Windscreens had invested heavily in maintaining both a mobile fleet of technicians and a fitting centre option.

He said: “More vehicles have technology built into the glass, such as cameras which operate advance driver assistance systems. Factory conditions are needed to replace them, including flat floors and laser positioning, so we signed the contract extension with one eye very much on the future.”