Mitsubishi pulls back on Motability and daily rental 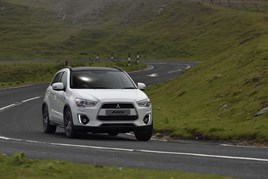 Mitsubishi has cut back on its less profitable fleet channels in 2016 because of restricted supply with one of its key Motability and daily rental cars.

Toby Marshall, sales and marketing director for Mitsubishi in the UK, said the brand’s car sales were more than 3,000 units lower until the end of August compared with the first eight months of 2015 because of supply of the ASX crossover.

“We’ve pulled back on Motability and daily rental, but will have a revised ASX later in the year.”

The facelifted model has a new front end, with styling features similar to last year’s changes to the Outlander, but engines and the interior are carried over.

Mitsubishi is expected to replace that model in the next few years and offer a fully electric compact SUV with a range of up to 400km (250 miles).

But its first new model is most likely to be the Shogun Sport in 2017, which is developed from the same platform as the L200.

The Shogun Sport will rival cars such as the Ford Edge, Kia Sorento and Hyundai Santa Fe.

Mitsubishi’s L200 registrations are similar to 2015, with just over 5,000 registered by the end of August, and it has recently added single cab and club cab versions of the fifth-generation model to the range.