Despite last year's Volkswagen emissions scandal, diesel registrations rose 2.8% as petrols declined -1.1%. Alternatively fuelled vehicles continued to outpace the market, up 32.6% against the same month last year with a market share of 3.4%.

Mike Hawes, SMMT Chief Executive, said, "September is always one of the biggest months for Britain’s new car market. The new 66-plate, combined with a diverse range of exciting new models featuring the latest technology, has certainly helped draw buyers into showrooms and many are taking full advantage of the attractive deals and low interest financing options on offer.

"However business and consumers place September orders many months in advance, so the ability of the market to maintain this record level of demand will depend on the ability of government to overcome political uncertainty and safeguard the conditions that underpin consumer appetite.” 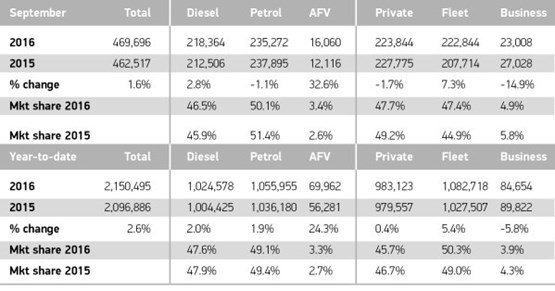 “Nevertheless, it is important to analyse the figures, rather than just looking at the headlines. As we have seen for the last six months, private sales have continued to fall causing the growth trajectory of new car registrations to steadily drop.

With the business market likely to be impacted by the outcome of the current HMRC review into company cars, the private sales market will become increasingly important to overall registrations in the UK."