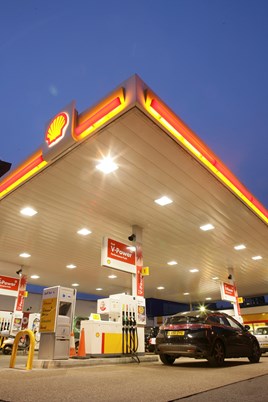 Electric vehicle (EV) charging points could become a familiar sight on fuel station forecourts after Shell confirmed it hopes to start introducing them from next year.

The availability of charging points has long been a barrier to the wider uptake of plug-in vehicles, especially for higher mileage company car drivers.

However, by placing charging points alongside petrol and diesel, more drivers could be persuaded to make the switch.

Karl Anders, Nissan GB national EV manager for corporate sales, said the increase of supermarkets and petrol forecourts or “destination charging” would markedly boost the ability of EVs to perform a wider range of journeys.

He said: “While EVs can already cover most journeys, this helps ‘normalise’ full EVs and gives added peace of mind.

“The UK actually has a very comprehensive charging network although it is crucial that it is always dependable, accessible and cost-effective in order to shift more drivers into real world low-emission vehicles.”

According to Zap Map, a website which tracks charge point location and information in the UK, there are 693 rapid chargers and 11,700 trickle charge points available to EV owners in the UK.

Shell currently has just one charge point location available, but has a network of 1,002 fuel stations across the UK. It told Fleet News it is “examining the potential to introduce EV charging points across some parts of our UK retail network from 2017 onwards”.

However, it refused to comment on how many EV charging points will be installed and how much it will charge drivers to recharge their vehicle’s battery.

She said: “The addition of charge points at destinations such as fuel retailers will enable quick top-ups that fit around owners’ lives, boosting range and providing further consumer confidence as the growth of the electric car market accelerates.”

Welch said the majority of charging will still take place at home but a public network acts as a useful reassurance to drivers to give them the opportunity to top up on longer trips.

She said: “The UK also has the best rapid charger network in Europe, with the fastest chargers available at 96% of motorway service stations.”

Fleets have been driving the uptake of plug-in vehicles,  with just one in four registered to private buyers (Fleet News: August 18).

The lion’s share – 72% of plug-in cars – was registered to businesses in the first six months of the year which, including July’s registrations, equates to more than 15,000 units – a 45% increase when compared to last year.

However, MPs on the Environmental Audit Committee say Government projections into ULEV adoption show it will miss the target for them to make up 9% of all new car and van sales by 2020 (Fleet News: September 15).

Alphabet believes the UK’s charging network is a critical issue for the future of EV sales.

David Bushnell, Alphabet product manager – mobility, said: “If the Government wants to hit its target for vehicles to be zero emission by 2050 the infrastructure will be a barrier to overcome.”

It is not clear, however, that other fuel retailers will follow Shell’s lead. BP declined to comment on whether it was considering installing EV charging points and Texaco, which does not own its fuel stations outright, said it would be up to each retailer to decide whether they wanted to install EV charging points.

Of the 1,100 Esso-branded service stations around 500 are owned by the fuel retailer. It told Fleet News it would be up to the independent owners of fuel stations to install charging facilities, while it had “no plans” to install them at Esso-owned facilities.

In terms of the supermarket fuel retailers, Asda offers more than 150 charging points across its network, but the others trail much further behind (see table).

Bushnell told Fleet News that, although there have clearly been increases in the UK’s vehicle charging network, a lot of this has been concentrated in and around London, rather than across the whole of the UK.

He said: “While it’s positive that supermarket and fuel retailers are looking to increase the amount of EV charging points available, it also depends on how many points will be installed at each location.

“We are already seeing problems where charging points are being used as a free parking space at supermarkets or a single space is taken up by one EV owner for around 30 minutes at a time.”

Bushnell said the industry also needs to discuss whether plug-in hybrids should be using the UK’s charging network at all, with the majority of plug-in hybrids able to reach their final destination to charge up. He thinks the industry needs to explore whether charging points should only be used for pure EVs.

He also said focusing on sheer numbers of charging points is irrelevant if they don’t work. “There needs to be a clearer picture of whether the charging point you are going to is open to the public, whether it is working and how much it will cost you to charge. All these things are not very clear at the moment for EV drivers,” he said.

“We also need to see whether petrol retailers are completing a box ticking exercise or whether they’re actually ready to invest in the direction transport is heading.”

Both Nissan and Alphabet want to see more Government financial support for workplace charging to help EV drivers charge their vehicles at either end of their journey.

Anders said: “There is a gap at the other end of the commute as workplace charging is not supported unless a fleet pays the full cost to install charging without grants. Assisting fleets with charger support or allowing drivers to use their grants at workplace would assist fleets.”

Bushnell said a lot of drivers, particularly in built-up areas where EVs are more prevalent, don’t have access to off-street parking to install their own charging point at home so a lot of them will be charging at work.

He said: “The Government needs to do more to incentivise this. Employers also need clarification on how EVs will be treated in term of future taxation, how long the grants will be in place, whether they will be reduced, and further details on electric fuel reimbursement.

“A universal charging format should also be agreed by all vehicle manufacturers and the ability to rapid charge your vehicle should be standard on all plug-in vehicles, rather than an upgrade.”