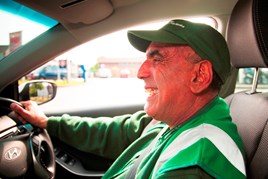 The organisation, which delivers meals on wheels across Hertfordshire, opted for a ‘coach in the cab’ system developed by GreenRoad Technologies.

A simple red/amber/green traffic light system alerts drivers each and every time they depart from a safe, smooth driving style, enabling them to take alternative action and embed good driving habits on a daily basis.

More than 150 vehicle movements are monitored and reports can be sent to managers detailing when and where any risky manoeuvres such as sharp braking have taken place.

Since HILS introduced the GreenRoad system across its fleet, the number of accident-related insurance claims has dropped by 42% in the first nine months of operation. Fuel economy has also improved, as safe, smooth driving uses less fuel.

Tom Cottam, head of business development at HILS, said: “Particularly as a charitable Social Enterprise, HILS has a duty to members of the public to ensure that its Community Team members are driving safely and to the standards expected of them.”

David Rodriguez, chief marketing officer at GreenRoad said: “From day one we have concentrated on changing driver behaviour as up to 90% of road accidents are down to driver decision-making. Our aim is to produce long-term, sustainable, positive change.”