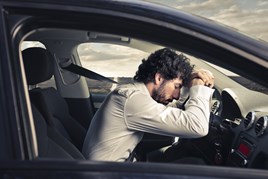 A fresh call has been made for the Government to act to prevent vocational drivers suffering from sleep apnoea from facing a ‘life sentence’ of guilt.

The OSA Partnership Group is urging the transport industry to support fast tracking of treatment for vocational drivers including HGV, van, bus and coach drivers.

Toby Tweddell was just 25-years-old when a lorry driven by Colin Wrighton crashed into a line of stationary traffic on the M62 motorway at the Rocket Interchange, Merseyside in August 2006.  Wrighton was initially charged with causing death by dangerous driving, but the Crown Prosecution Service offered no evidence against him after it was revealed he suffers from Obstructive Sleep Apnoea Syndrome.

This week Wrighton met with Toby’s father Nic Tweddell, prompting a renewed call for public support for a campaign to fast-track medical treatment of the condition. The OSA Partnership Group’s proposal would mean that people who drive for a living wait no more than four weeks for treatment.

In a joint family statement after the meeting, Nic Tweddell and his brother-in-law Seb Schmoller said: “As Toby’s father and uncle, we believe that the Four Week Wait campaign is vitally important. We urge anyone who cares about this vital issue to write to their MP asking that they back the campaign.  It takes only a few minutes, using https://www.writetothem.com/ service."

The OSA Partnership Group, whose members include medical professionals, motoring experts and industry representatives, believes that fast tracking treatment would encourage drivers with symptoms to come forward for treatment and thereby reduce the number of deaths and serious injuries on UK roads caused by drivers with undiagnosed obstructive sleep apnoea syndrome (OSAS).

The OSA Partnership Group is calling on the Department of Health to issue guidance to Clinical Commissioning Groups (CCGs), hospitals and GPs to expedite treatment of vocational drivers with OSAS to enable driving again within a maximum of four weeks following first referral.

Obstructive sleep apnoea syndrome (OSAS) is particularly common amongst middle-aged men, especially those who are overweight. Studies have shown that when a driver with untreated OSAS gets behind the wheel of a vehicle, they are between 3 and 9 times more likely to have an accident and that this accident is likely to be of increased severity.

Professor John Stradling, a member of the OSA Partnership Group and author of the campaign paper, has spent his career working with sleep apnoea patients as a respiratory consultant in Oxford. He says, “In my experience vocational drivers are often the safest on our roads but those with OSAS have no control over their sleepiness. We also know that these drivers are reluctant to come forward with symptoms of OSAS for fear of losing their licence, and therefore their livelihood.

“Through the collaborative work our Group has undertaken with the transport industry, we believe that by expediting treatment, we can reduce this fear and therefore encourage drivers to get the treatment that will allow them to drive safely (and considerably benefit their quality of life). In doing so, we can eliminate many unnecessary road traffic accidents, and ultimately reduce the number of serious injuries and fatalities.”

The most usual treatment for OSAS is Continuous Positive Air Pressure (CPAP). Indeed in 2008 NICE carried out a technology appraisal that said that CPAP should be available to all who required it but it did not give a timescale for supply, and as a result this varies widely across the UK from a few weeks to several months. Yet it is the uncertainty as to how soon they will be treated that stops many drivers coming forward.

RAC Business spokesman, Simon Peevers added: “As a member of the OSA Partnership Group we have been firm supporters of the Four Week Wait campaign since its launch. The fact is the country and its economic development depends on the millions of commercial and fleet drivers that take to the roads every day, whether they are HGV drivers making deliveries or company car drivers attending sales meetings.

“As such it is vital that all drivers are aware of the symptoms of this potentially devastating condition and have access to medical support and treatment as quickly as possible.”

The OSA Partnership Group is working with fleet operators to introduce screening for Obstructive Sleep Apnoea Syndrome so that drivers at risk can receive prompt treatment for the condition.