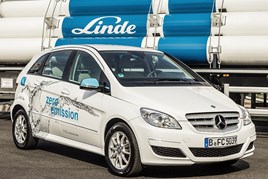 Hydrogen Mobility Europe (H2ME) – the multi-country, multi-partner project to demonstrate that hydrogen can support Europe’s future transport demands – has announced that the first 100 fuel cell electric vehicles (FCEVs) deployed by H2ME are now on the road in Germany, France and the UK.

The largest-scale project of its kind, H2ME will:

Sixty of Symbio’s Renault Kangoo ZE-H2 range-extended fuel cell vans have been deployed in the UK and France, supporting the development of a network of hydrogen refuelling stations in those markets.

In addition, Daimler has deployed 40 B-Class F-CELL vehicles under H2ME in Germany. Thanks to the 700-bar, high-pressure fuel-tank system, the car has a long operating range of around 400 kilometres and can be refuelled in less than three minutes.

The vehicle’s electric motor develops an output of 100 kW and, with a torque of 290 Nm, the car combines local emission-free mobility with day-to-day suitability and good performance figures.

For CETUP, a logistics and delivery company, the Renault Kangoo ZE-H2 equipped by Symbio is a welcome addition to the fleet. It reduces overall fuel dependence and emissions, while providing the smooth ride and power necessary to keep the business moving forward.

In total, more than 1,400 FCEVs will be deployed as part of the H2ME project throughout the UK, France, Germany, the Netherlands and Scandinavia. The aim is to increase the number of FCEVs operating on Europe’s roads to build on the strong networks of hydrogen refuelling stations created by H2ME and other initiatives across the EU.

Recognised by the EU as critical to solving Europe’s environmental and economic challenges, fuel cell vehicles have been identified as a promising technology to lower emissions and improve energy security with minimal impact on the driver in terms of functionality or convenience.

“Symbio is proud to be part of the hydrogen momentum in Europe and contribute to a low-carbon economy by facilitating the deployment of 100% zero-emission and 100% electric vehicles,” said Pierre-Yves Le-Berre, VP, Symbio. “Electric vehicles integrated with Symbio’s range extender are able to reduce air pollution in urban areas.

“Our ambition is to equip all urban delivery centres with our vehicles to guarantee the absence of harmful emissions, as well as address new market trends and regulations. For instance, if a delivery centre used a Renault Kangoo equipped with our range extender, driving 200 km a day in Paris, it would remove the carbon emissions of 20 private vehicles.”

“Now we strongly continue to pursue our goal of bringing the next-generation fuel cell electric vehicles, based on the Mercedes-Benz GLC, to the market. But the big breakthrough of electric mobility with fuel cell depends on more than just the factor ‘car’: it is ultimately the combination of an attractive product offer, infrastructure, services, and not least, public support.

“The last hurdles we will have to overcome in intensive cross-industry and cross-border teamwork – H2ME is a very good example of it.”

“To start the transition to a zero-emission transportation system it is essential to put the latest technology in drivers’ hands and use the hydrogen demand created to develop and test the refuelling networks, which are required to support these vehicles.

“We are proud of the rapid progress our partners have made in deploying this technology, which can accelerate Europe’s move to clean transportation.”

Fleet Poll
Will the Government continue its freeze on fuel duty in the March Budget?
Vote
View all
131