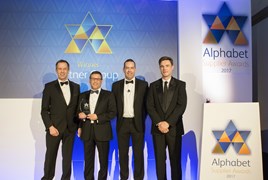 Alphabet has announced the first winners of their inaugural ‘Alphabet Supplier Awards’ to recognise and celebrate the achievements of Alphabet’s network of service providers over the past 12 months.

The awards evening was hosted at the Beaumont Estate, Old Windsor by Alphabet’s chief operating officer, Matt Sutherland, along with comedian and TV personality, Ed Gamble.

During the evening, awards were presented to the leading suppliers for the year in eight categories which included LCV Converter, Rental Provider, Dealership, Dealer Group and Fleet Service Provider - as well specific awards for Innovation, Collaboration and Service Excellence. The event culminated in the crowning of an overall winner as Alphabet’s Service Provider of the Year for 2017.

The Awards were the culmination of a process which began last year when nominations were sought from across the entire Alphabet business and customer base. These nominations were then shortlisted and winners decided based on additional scoring criteria which included Key Performance Indicator (KPI) and Satisfaction scores from Alphabet customer interactions. The winners in the eight categories were as follows:

The overall winner for 2017 was selected from these eight winners and the first ever ‘Alphabet Service Provider of the Year’ award was won by Sytner Group, who also picked up ‘Dealer Group of the Year’. The awards were collected on behalf of Sytner Group by Vince Floyd, director of corporate sales (pictured centre with Alphabet’s CEO Nick Brownrigg, Matt Sutherland and host Ed Gamble).

Floyd said afterwards: “We’re tremendously proud to have received the Alphabet Service Provider of the Year award, especially as this is the first time that they have recognised their suppliers in this way.

“I think the award demonstrates the collaborative and customer oriented approach that the two organisations share, as well as the incredibly strong professional relationships that have developed between the two companies and their employees.

“To be celebrated as Alphabet’s outstanding Service Provider for 2017 is testament to all the Sytner employees around the UK who every day go above and beyond to meet the needs of Alphabet and their customers. This award is well-earned recognition of the dedication, knowledge, enthusiasm and ‘can-do’ attitude of the Sytner team who are involved with Alphabet.”

Sutherland said: “The new world of business mobility - with its increased levels of complexity and connectivity, as well as the multitude of customer touchpoints and interactions - demands a strong network of like-minded, customer focused and innovative companies in order to meet the real-world challenges and demands.

“To our customers, these suppliers represent Alphabet and how they do so is absolutely vital to how customers feel about us and the service we provide.”