New research underpins concerns about the mental health of drivers 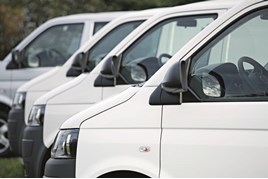 Mental health fears for delivery drivers revealed in a recent survey have been reinforced by research being carried out by the Transport Research Laboratory (TRL).

The initial study, conducted by Mercedes-Benz Vans, painted a picture of drivers struggling to cope with the time pressures that the job entails. Almost one in five van drivers described their current mental health as poor or very poor, with three-quarters saying work was a contributory factor.

TRL told Fleet News that the latest results from a study being conducted at its research facility show those initial fears for driver well-being were well-founded.

“Our ongoing research suggests that commercial drivers are at significantly higher risk of developing poor mental health, with working conditions singled out as one of the reasons,” said TRL cognitive psychologist Shaun Helmann.

“There is a need within the industry to raise awareness, remove stigma and make it acceptable for drivers to talk about their concerns with colleagues and their employer.”

More than half of the van drivers identified with poor mental health in the Mercedes-Benz study said that increased time pressures (52%) and increased workload (50%) were factors affecting their mental health.

One in three also highlighted job uncertainty as a contributory factor and one in five said congestion impacted on their state of mind.

Despite drivers recognising that their mental health may be suffering, only one in three said they had spoken to their manager about their concerns, with more than one in 10 saying they had not spoken to anyone at all on the subject.

Steve Bridge, managing director of Mercedes-Benz Vans, said: “Our research findings act as a clear call to van drivers to talk about their mental health concerns and work pressures with their employers and for employers to actively listen to the real concerns of their workforce.”

Research conducted by the Mental Health Foundation earlier this year, showed how prevalent mental health problems are in the workplace.

More than 40% of survey respondents said they had experienced depression, while more than a quarter said they had had panic attacks.

The most notable differences, according to the study, were associated with household income and economic activity – nearly three-quarters of people living in the lowest household income bracket reported having experienced a mental health problem.

Compared to the national average, the foundation said that the figures from the Mercedes-Benz study indicated that van drivers are experiencing an increased rate of poor mental health. This may be explained, in part, by the pressures of the job, and the fact that van drivers can often be isolated, it said.

Chris O’Sullivan from the Mental Health Foundation believes that a working life which supports an individual’s ability to thrive is good for mental health. “We also know that challenging working conditions can be toxic to our mental health and we may lose the mental health benefits work can bring,” he said.

“The world of work is changing. In that change, and the pressure to become (financially) leaner, there are hazards for mental health and wellbeing, and a risk that some people can be left behind. We want to see a labour market which includes everyone who wants to be a part of it, and recognises and addresses challenges before they become toxic.”

To do that, O’Sullivan says employers need to understand and address the causes of mental health problems and ensure that working life is supportive and addresses any risk factors.

He concluded: “While there is a wealth of good evidence on mental health at work, we still have many challenges and unanswered questions.

“We need to recognise that many people are working in rapidly changing, sometimes hostile, environments where the risk of psychological injury is high.

“We need to recognise that the riskiest jobs for mental health – those with the most demands and the least control, the least reward per effort, and where the organisational justice is negligible – are those often occupied by people with the highest risk of mental health problems.”