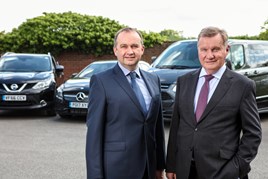 Regal Rentals, which has its head office in Chester, started out 19 years ago and is an independent licensee for AVIS Budget. Its branches stretch from Stoke-on-Trent in the south to Carlisle in the North of England.

Jamie Frost, managing director of Regal Rentals, said: “This is our first branch in Greater Manchester and forms a key part of our continuing expansion across the North of England.

“During the next five years we have plans to increase revenues by more than 30 per cent with employee numbers likely to rise to around 150.”

The company has brought on board Tony Burns as commercial manager. Burns was previously a business development manager for Inchcape Wirral Volkswagen, where he worked for over 20 years. Regal Rentals has also unveiled new branding and a company website to further support its growth plans.

Regal Rentals was founded in 1997 by Frost and two fellow directors. Last year, Frost became the sole shareholder of the business following the retirement of his two partners.

An independent vehicle rental company, Regal Rentals works with private, business and corporate customers across the UK from its network of 12 branches and head office in Mollington, Chester.

The company now has more than 1,250 vehicles in its fleet and purchases an average of 2,000 vehicles every year.

Frost said: “We are looking forward to celebrating our 20th anniversary later this year, an achievement that has been made possible thanks to the knowledge and dedication of everyone in the Regal Rentals team.

“We pride ourselves on providing customers with the best possible customer service and engagement which, in turn, has allowed us to achieve industry-leading levels of client retention.”