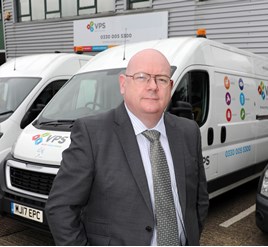 Service, maintenance and repair (SMR) cost savings - which are expected to ramp up further following implementation of a driver compliance initiative - are being achieved by VPS UK in partnership with Fleet Service Great Britain (FSGB).

Following a series of business acquisitions resulting in significant fleet expansion and a major restructuring that included the appointment of a new top management team, Steve Mulvaney (pictured) was appointed VPS head of fleet from his previous role as network operations southern manager at Evander Glazing & Locks.

That triggered an in-depth fleet review and ultimately an expansion of the business partnership with FSGB with the delivery of a broader range of in-life fleet services that now includes accident and risk management as well as vehicle maintenance and rental management and management services related to vehicle taxation and fine payment.

The pence per mile vehicle operating costs on the VPS fleet have reduced since FSGB took over management responsibility when the fleet specialist was launched in 2015.

All VPS vehicles have SMR work undertaken through FSGB’s nationwide independent garage network. VPS has a track record of outright purchasing all vehicles, which are typically utilised over a five-year/150,000-mile operating cycle, although replacement is influenced by mileage and SMR costs.

What the figures reveal is that despite the fleet working harder with average mileage rising, average fleet costs per vehicle are reducing. Mulvaney said: “It was clear to me that previously VPS did not have a real grip on fleet costs. FSGB was providing data, but it was not being used.”

VPS now employs a data analyst within the company’s fleet department to study the information provided by FSGB.

Mulvaney said: “The data we are provided with is extremely robust and it is highly probable that the cost savings are even higher because at the time FSGB took over maintenance management of the fleet costs were not being recorded as accurately as they are now.”

The programme has been developed to continually measure driver performance, while also ensuring compliance, and by acting on the data and management reports provided, vehicle-related costs will reduce.

The Achieve programme includes a driver app delivering 24/7 support to employees. Mulvaney said: “The driver app benefits VPS by allowing us to carry out full vehicle inspections both scheduled and ad hoc at the touch of a button. This information is seamlessly uploaded into the customer portal for immediate review. We now have a better view of the condition of our fleet at our fingertips.

“Additionally, drivers can now book service, tyres and glass requests direct on the app. It is excellent technology, seamlessly delivered.”

VPS is using the data relating to cost-influencing factors such as fuel use, tyre wear, the replacement of friction parts and in numerous other areas as the basis for a driver reward scheme.

FSGB head of sales Marcus Bray said: “As FSGB builds up its database on each vehicle, we are confident that significant further costs savings will accrue on a per vehicle basis.”