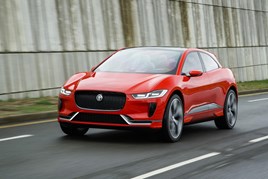 Jaguar Land Rover (JLR) CEO Ralf Speth has urged the Government to act more quickly if it wants to be at the forefront of the ‘mobility revolution’, which will see a shift from the internal combustion engine to autonomous, connected, electrified and shared vehicles.

“In this new mobility revolution, if there is not a nimbleness in response, the danger of failure is too harsh to contemplate,” he said in his keynote speech at the JLR Tech Fest in London.

Speth said that JLR’s “journey” had already started with the launch of Jaguar’s first electric SUV, the I-Pace, next year. He announced plans for a portfolio of electrified vehicles across the model range from 2020, as well as revealing details of the brand’s vision for mobility in 2040 with the Future Type concept and a voice-activated artificial intelligence steering wheel, known as Sayer (see fleetnews.co.uk, September 7).

“We are not just preparing for the future, but delivering it,” Speth said.

However, he challenged the Government to match his company’s efforts and those of the whole automotive industry.

“Dates are set by UK Government for the banning of diesel and petrol vehicles by 2040, but with no detailed plans behind this bold statement,” he said.

“We as a company can deliver electric vehicles. Where is the network of charging points that they will require to function? Indeed, where is the power grid that will allow us to build them?

“We know the levels of connectivity that will be needed in the future to allow autonomous vehicles, freeing individuals, increasing productivity, reducing accidents. We know of the 5G network the rest of the world is working upon to enable it. Where is it here?”

Speth’s comments come as research commissioned by Addison Lee suggests that the number of rapid charging points planned for London is not sufficient to enable more high mileage taxi and private hire fleets to switch to electric.

The report’s author, economist Rebecca Driver, said: “Due to their high mileage, converting a single private hire vehicle to electric will have the same impact on vehicle miles as switching 10 privately-owned cars.

“The positive impact this would have on London’s air quality is dramatic but a large scale rapid charging network is also a necessary pre-condition for fleet operators seeking to invest in electric vehicles.”

At ‘The Electric Switch’ debate at the JLR Tech Fest, Richard Bruce, head of the Office for Low Emission Vehicles (OLEV), suggested the UK was to “some extent” ready today for the switch to electric vehicles, with 110,000 EVs on the UK’s roads and around 11,000 charging points and 1,000 rapid charging points.

“It all depends on the speed of uptake,” he said, suggesting that if uptake rapidly shot up the UK might not be ready but if it is “more proportionate” then “we probably will be”.