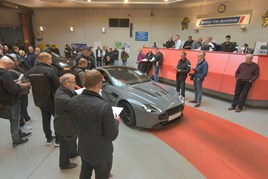 BCA has announced record traffic for its Live Online platform with over 105,000 visits in the first week of October.

BCA claim, “the buoyant market that has helped to drive record sales at auction centres across the UK is also pushing record engagement for its online platform.”

Live Online has seen sales penetration rise to 28% across the board at BCA, a year-on-year increase of four percentage points (October 2016 vs October 2017). The platform is also seeing bids from the iPad app match the record levels seen in March 2017.

BCA’s managing director of UK remarketing Stuart Pearson said: “We set out to give our buyers the best access to stock and the widest choice of vehicles in the UK and that means meeting the needs of online buyers.

“We combine the reach of 23 remarketing centres and a national logistics network that means our fast-growing online audience of professional buyers can purchase stock 24/7 confident in the knowledge that vehicles will be delivered to their retail premises quickly and efficiently.”

BCA Live Online allows remote buyers to compete with auction hall bidders in real-time, bidding and buying vehicles as they pass through the auction hall.

BCA has invested in mobile technology to allow buyers to bid ‘virtually’ via iPad or iPad mini. The system is optimised to run on Wi-Fi or 3G connection, meaning it can be used almost anywhere.

“It is supported by advances in our imaging and appraisal technology that provides buyers with a consistent description of a vehicle’s condition.”

BCA reports, “Tuesday is the busiest day for its digital platform, and it regularly has over 1,000 active bidders participating. During peak times, there can be more than 1,400 bids placed through the system in a five-minute period”.

BCA Logistics is expanding its operations in the West Midlands and moving to a new office at Birmingham Business Park.