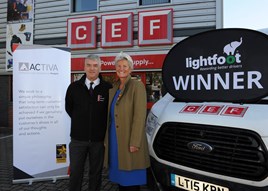 Ian Thorn of CEF is the first ever winner of Lightfoot’s new Fleet Manager of the Week initiative, sponsored by Activa Contracts.

It rewards fleet managers for ensuring that their drivers behave safely behind the wheel.

A good fleet manager can be the difference between a safe, efficient fleet of drivers with a high vehicle “up-time” rate, and a law-suit waiting to happen, says Lightfoot. This is why it works with managers closely, to ensure they understand the device and know how to get the best out of it, so they can, in turn, make sure their drivers are engaged and behaving well on the road.

Lightfoot said it was delighted that Ian Thorn is the first winner of the prize. He has been a strong advocate of Lightfoot since its installation into CEF’s vehicles and he has ensured that it has been fully adopted as part of the business’ culture, which is undoubtedly a big part of why it’s been so successful, it said.

“He has actively championed Lightfoot from the beginning, resulting in his fleet continuously hitting their targets. Ian has even decided to donate his award to Robert Sheppard, a fleet manager from Torquay Group, one of CEF’s depots based in Devon. This further demonstrates Ian’s generosity and commitment to maintaining CEF’s high standards.”

Lisa Temperton, sales and marketing director at Activa Contracts, added: “The initiative is just another example of Lightfoot setting themselves apart as they continue to deliver a first class, proactive service to our mutual clients.”

Thorn said: “I am thrilled to have been awarded the first ever Fleet Manager of the Week Award. I look forward to a continued partnership with Lightfoot to help further encourage and reward good driving in our fleet.”

Lightfoot has secured Government funding for a £1.8 million project to help further develop its in-cab technology that enables and rewards smoother driving styles.

Allianz and Lightfoot to continue driver of the week reward programme

Allianz and Lightfoot have renewed their partnership to continue the reward programme, ‘Lightfoot Fleet Driver of the Week’.