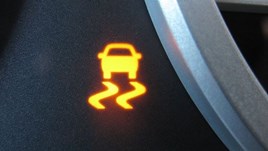 It marks the first time a technology has received the award over a campaign, group of people or organisation.

The European Union estimates that 188,500 crashes involving injury have been avoided and more than 6,100 lives saved since ESC was introduced in 1995.

Claes Tingvall, chairman of the judges for Prince Michael’s Awards, described it as ‘possibly the most significant safety innovation since the three-point seat belt’.

Skidding, when a vehicle’s tyres lose grip, is one of the main causes of traffic crashes that result in injury or death.

ESC employs sophisticated electronics to assess - 25 times a second - whether the car is moving precisely in the direction that the driver is steering.

When it senses an imminent skid, it applies the brakes on individual wheels to bring the vehicle back to the chosen line.

ESC was developed in the early 1990s in a joint venture between Daimler and Robert Bosch and was first fitted to Mercedes-Benz cars in 1995.

The key component is the yaw sensor, originally developed for missiles, which detects the rate of the car’s movement around its vertical axis.

Mercedes called it ESP, and while Extra-Sensory Perception has an appropriate ring about it, when they came to introduce it, rival car makers adopted their own acronyms: DSC, VDC, VSC, VSA and many others.

ESC is the generic name adopted when the UN Forum on Harmonisation of Vehicle Regulations (WP29) drew up a universal standard for the system.

After vigorous campaigns by the FIA Foundation and others, ESC was made compulsory for all new cars and light commercial vehicles sold in the EU from November 2014.

Accelerated use of ESC is now being successfully promoted by the Stop the Crash Partnership – a programme from Global NCAP – the 2016 Premier Award winner.

Nine brands, representing 85% of the Chinese car market, have agreed to fit ESC as standard in 2018.

Commitments to mandate the system have now also been made by the Governments of Argentina, Brazil and Malaysia.

In announcing his Premier Award today, Prince Michael said: “The latest collision avoidance systems have behind them what has been hailed as the most significant advance in vehicle safety since the introduction of the seat belt.

"I am delighted that company which invented the system Bosch is here today to receive the award.”

Skanska’s safe fleet award was in recognition of its comprehensive approach to risk management, which includes measuring commuting incidents in accident statistics.