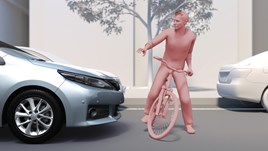 Vehicles will use a single-lens camera and radar with higher performance, increasing the scope of hazard detection and improving functionality. The hardware is also more compact and easier to install.

Between speeds of approximately six and 112mph, the upgraded Pre-Collision System will detect vehicles ahead and reduce the risk of hitting them from the back. The system can also detect potential collisions with pedestrians (in day and night-time driving) and cyclists (during daylight hours), with automated braking operating at relative speeds between six and 50mph.

The new Lane Tracing Assist keeps the vehicle centred in its highway lane by helping the driver with steering control, when the Adaptive Cruise Control is operating. LTA also comes with an upgraded Lane Departure Alert which can recognise the margins of straight roads, even when white line markings are not used. Should the vehicle deviate from its lane, the system will sound a warning and provided assistance for the driver to steer the car back to its correct course.

More than five million Toyotas worldwide are now using Toyota Safety Sense; in Europe, 92% of new cars are fitted with the technology. Studies in Japan reveal that in real-world traffic conditions there has been an approximate 50% reduction in rear-end collisions – and a decrease of around 90% where Toyota Safety Sense operates in combination with an Intelligent Clearance Sonar (ICS).

The second generation Toyota Safety Sense will be progressively rolled out from the start of 2018, predominantly in Japan, Europe and North America.

Toyota is the highest-ranked automotive brand in the latest UK Customer Satisfaction Index (UKSCI), produced by the Institute of Customer Service.