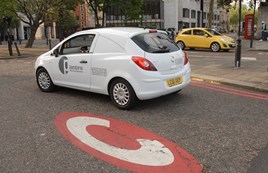 Transport for London (TfL) says motorists who fall foul of the congestion charge will pay more from January 2, 2018.

A proposed rise for offences on TfL's road network will also follow later in the year, subject to review by the secretary of state for transport.

The increase of the discounted penalty, from £65 to £80, and the full penalty, from £130 to £160, follows a public consultation that received more than 7,400 responses. It is expected to encourage greater compliance and help to improve traffic, says TfL.

Later this year, and subject to the review by the secretary of state, TfL is also proposing to increase penalty charge notices (PCNs) for offences which take place on their road network.

More than a third of all London's traffic uses TfL's road network, often referred to as red routes, and vehicles that block roads, drive in bus lanes, park incorrectly or make banned turns, not only cause inconvenience to road users, but create hazards, particularly for pedestrians and cyclists, says TfL.

Paul Cowperthwaite, TfL's general manager for road user charging, said: “Although the Congestion Charge has been effective in reducing the number of cars entering central London, weve seen a 12% increase in the number of motorists being issued with PCNs in the last five years. This shows that the deterrent factor of the existing PCN has reduced over time.

TfL says that the congestion charge has played an important role in reducing the number of vehicles in central London, and fines for not paying this charge encourage drivers to be compliant.

But the 12% increase in the number of motorists being issued with congestion charge PCNs in the past five years, from around 1.3 million in 2011/12 to around 1.5 million in 2016/17, is a clear indicator that the effectiveness of the current PCN fine has reduced over time, says TfL.

Money raised from PCNs is reinvested back into improving London's transport network. This includes investing in maintenance, reducing danger on the road and transforming the capital's streets into more attractive, accessible and welcoming places, in line with the Mayor's draft transport strategy, it says.

TfL is also making it easier to pay with the launch of the official TfL congestion charge app this week, which allows motorists to pay using a mobile device for the first time.

BT fined for the second time in 12 months by TfL

BT has been fined £25,000 after Transport for London prosecuted it for serious lapses in safety, which put the public at significant risk in Lambeth.

Cars running out of petrol, and lorry drivers unaware their vehicles are over-height, cause delays at the tunnel costing the capital almost £7m each year.