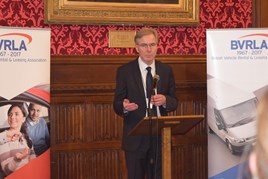 Brexit will be at the top of the BVRLA’s agenda this year, as the association outlines its four key areas of focus for 2018.

Speaking at the BVRLA’s annual parliamentary reception, Keaney told delegates: “It is very clear from government Brexit means Brexit: we need a trade agreement that gives us a tariff free environment going forward – that is critical for our members.”

He warned that without a tariff agreement vehicle prices could go up by 10% while parts could rise by 4.5%.

“Our sector will face increased costs as it  goes forward,” Keaney warned.

Air quality will also be a key focus for the BVRLA, and it is calling for a national framework to define low emissions zones.

Keaney said: “There is a regional delegation of authority to key cities as to what their clean air ones may look like. If you get different clean air zones and different regulations, that makes no sense at all for our members. They must have the same criteria across all low emissions zones.

“We absolutely support the national air quality initiatives and we support the regional thrust of this. But that needs to be on a national framework. That is a key piece of work that we will do going forward.”

The BVRLA will be promoting its Mobility Credits scheme as an alternative to the scrappage scheme.

“We don’t believe a national scrappage scheme is the right thing to do. We can demonstrate that you can make a significant difference in getting 40,000 dirty diesels off the road in the key metropolitan areas by introducing a mobility credit.

“This is where car clubs and the rental sector can play a significant role going forward,” said Keaney.

Taxation was identified as a third area of focus for 2018, with Keaney labelling the recent budget as a ‘kneejerk reaction’ and something that ‘must be avoided in future’.

He said: “The increase in company car tax via the diesel fuel supplement was the wrong thing to do. It penalises drivers who though they were doing the right thing at the time.”

The BVRLA felt the budget does not do enough to encourage older dirtier cars off the road. Keaney said the BiK treatment of low emissions cars, which sees taxation rise until 2020, is a ‘cliff edge’ which deters drivers from choosing plug-in vehicles.

Terrorism will be the fourth area of focus for the BVRLA which will promote its own accreditation scheme as the key part of a deterrent against terrorists.

The budget delivered some much-needed clarity on diesel taxation while providing vital extra support for electric and autonomous vehicles, says the BVRLA.

Diesel will lose its most popular fuel crown next year, says BVRLA

It says that the fuel type will be overtaken by petrol, as more company car drivers, particularly non-essential users, make the switch to petrol and hybrid.