Future BMW and Mini models to use i3 traction control technology 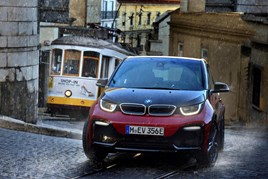 Future BMW and Mini models will use the traction control technology currently used in its i3 which offers 50 times faster responses for greater traction and driving stability.

The system has been adapted specifically to the instantaneous power delivery of the BMW eDrive system and the manufacturer says this improves traction and driving stability when pulling away, in active brake energy regeneration phases and when accelerating out of tight corners.

BMW says the 50 times faster response has been made possible because, unlike conventional driving stability systems, the control process is now calculated directly in the powertrain instead of in a remote unit requiring long signal paths.

While the system has been developed for purely electrically driven cars, BMW says it will also optimise traction, driving stability and driving dynamics in vehicles with combustion engines.

It will therefore be fitted in BMW and Mini models with front-, rear- and all-wheel drive.