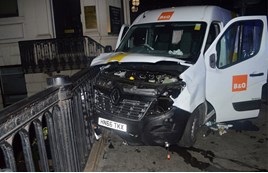 Fleet operators could face a rise in daily rental prices this year as experts warn that insurance costs will increase in response to terror attack pay-outs.

Bob Baillie, commercial director at United Rental Group, told delegates at the British Vehicle Rental and Leasing Association (BVRLA) industry outlook conference, that rising costs, particularly in the insurance sector following last year’s terrorist attacks in the UK when hire vehicles were used as a weapon, were one of the biggest challenges for rental companies.

“The first one on Westminster Bridge, you’re looking at claims costs predicted in excess of £150 million and we as an industry and as the smaller operators, the independents, we have to try to embrace those costs in the insurance and the re-insurance market,” he said.

He pointed out that the rental industry has also had to face last year’s vehicle excise duty (VED) changes, as well as general overheads.

“There is a lot of education we need to do with customers and we need to wake up to perhaps trying to pass on some of those increased costs to our customers – not an easy task,” he said.

The warning comes as FORS, the Fleet Operator Recognition Scheme, launches a new ‘Security and counter terrorism’ online training resource, and new research reveals that 87% of commercial drivers and operators see terrorism as a potential threat to their vehicles.

“The terrorist atrocities in 2017 have had a significant impact on the insurance costs for the rental industry in general,” he said.

“As policies are renewed the liabilities borne by the insurers are being passed on to the rental companies; due to staggered renewals it will be well into 2018 before all rental companies understand the true commercial consequences of these vicious attacks.”

He added: “Fleet insurance is such a substantial part of all rental companies’ operating costs it seems likely that, ultimately, these increased costs will be passed on to the consumer.”

Rental operators are also concerned that insurers may be reluctant to provide quotations in the future.

A spokesperson for Enterprise Rent-A-Car said: “There is a danger that some insurers and re-insurers could withdraw cover to the vehicle rental sector, or increase premiums to breaking point for some companies. We believe this could disproportionately affect smaller operators and could impact competition and possibly even pricing.”

However, the Association of British Insurers (ABI) downplayed the impact of the terrorist attacks on rental vehicle insurance.

Ben Howarth, senior adviser for motor and liability at the ABI, said: “There are lots of reasons why insurance premiums may change from year-to-year. The biggest pressures on motor premiums at the moment are Government changes to the tax on insurance and to the method used for calculating major compensation pay-outs.

He continued: “Insurers will be considering the implications, but it is too soon to say whether there will be any impact on the operation of the wider market.”

Anthony Monaghan, senior vice president, transportation and engineering practice, UK and Ireland at insurance brokers Marsh, advised rental companies that if they faced “greater underwriting scrutiny” they should “work with their brokers to present insurers with robust evidence of their risk management practices”.

He said: “Firms who are able to demonstrate a comprehensive approach to risk management, coupled with a good claims record, are likely to receive more favourable terms from insurers.”

An expert in Islamist radicalisation has warned that vehicles will continue to be used as a weapon in terrorist attacks and that the fleet industry must think about “how to best raise the barriers to participation”.

In a video broadcast at the BVRLA conference, Shiraz Maher, a lecturer at King’s College London and deputy director of the International Centre for the Study of Radicalisation, said the terrorist attack in Nice, France, was “hugely significant”.

It demonstrated how effective a vehicle could be in an attack of that kind and inspired others to carry out similar attacks in Scandinavia, Germany and the UK.

“I think, unfortunately, we have not seen the last of vehicle-based attacks either in the UK or elsewhere across the Continent or, indeed, in the United States,” said Maher.

The BVRLA set up a counter-terrorism taskforce last year, following the Westminster incident, and is working with consultancy firm Westbourne Communications to develop a public affairs campaign to demonstrate leadership.

It is continuing to work with counter-terrorism authorities to demonstrate self-regulation is best but will co-operate to risk mitigation through data-sharing.

Motorists want police funding to be used to fight terrorism instead of road crimes, a new survey by Servicing Stop has found.