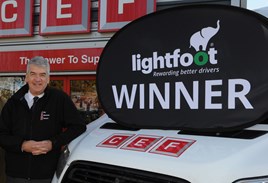 The supplier of electrical products and services, which has a network of 390 stores across the UK, has installed the technology into its fleet of light commercial vehicles and Aspire graduate trainee cars.

The system was installed primarily to improve fuel efficiency, but CEF has also seen significant reductions in the frequency of collisions.

"That’s a 45% reduction in the amount of time our vehicles are out of action and equates to a significant six-figure annual saving.”

Lightfoot - which provides drivers with real-time audio and visual feedback in-cab - coupled with the introduction of rewards and incentives, has improved driver behaviour, with the majority of employees now striving to drive as efficiently as possible.

Martin Kadhim, director at Lightfoot, added: “CEF’s drivers have really taken to the concept of being recognised and rewarded for safer and more efficient driving.

"They are more aware of what’s occurring on the road around them and, as a result, they are involved in fewer accidents.  This has led to reduced risk on the road, fewer delivery cancelations, less stress among drivers, lower emissions and increased fleet efficiency.”