The damage caused to vehicles from potholes over the past year has cost £915 million to repair, according to research from Kwik Fit. An increase of 34% on the £684m repair bill in 2016.

The average cost of repairing damage to components including tyres, wheels, suspension and bodywork has risen only slightly – from £108.60 in 2016 to £111.

However, the number of drivers whose vehicles have suffered damage over the past 24 months has jumped – from 6.3 million drivers a year to 8.2 million – leading to the total bill for repairs increasing by £231 million.

Local authorities in England and Wales report that the gap between the funds they received and the amount they actually needed to keep the carriageway in reasonable order was almost £556 million – a shortfall of £3.3m for every authority. And, it would now take 14 years – up from 12 years in 2016/17 – to get local roads back into a reasonable steady state, provided adequate funds and resources were available.

“The poor condition of the road network is hitting motorists’ wallets ever harder,” said Roger Griggs, communications director at Kwik Fit. “It’s important to note that while sometimes a pothole will cause a blow out to a tyre, in many cases the damage is not immediately obvious.

“Often a pothole can cause a slow puncture, bulge on the inside tyre wall or hairline crack in the wheel rim which only becomes evident days after the impact.”

More than two thirds (70%) of drivers say they have hit at least one pothole a week over the past 12 months, with a quarter (25%) hitting one every single day. Drivers in the north west of the country have the worst experience, with over a third (36%) of drivers suffering a pothole impact on a daily basis.

Drivers give a combination of factors as the reasons for hitting potholes. 88% of drivers cited road or weather conditions, such as the pothole being hidden by a puddle or it being too dark to spot, but many (47%) also said they had to make a deliberate decision to hit the pothole as avoiding it would have compromised their own safety, and that of other road users.

Almost one in 10 drivers (9%) admitted that the impact was their own fault, as they were either not paying attention to the road surface or driving too fast to stop in time.

A quarter of drivers who have hit potholes over the last year have suffered costly damage to their car, with the most common repairs being to tyres (4.2 million), wheels (2.7 million), suspension (2.4 million) and bodywork (1.2 million).

Drivers overwhelmingly believe that the nation’s roads are deteriorating, with 76% saying that the road surfaces on their most frequently made journeys are in a worse condition than five years ago, with 52% saying they are significantly worse.

The condition of the road network is having an impact on driver behaviour, some aspects of which are likely to make the situation even worse.

One in eight drivers (12%) say they drive a longer route than the most direct journey as it has better road surfaces, thus adding unnecessary wear and tear to both road and vehicles, as well as using extra fuel. 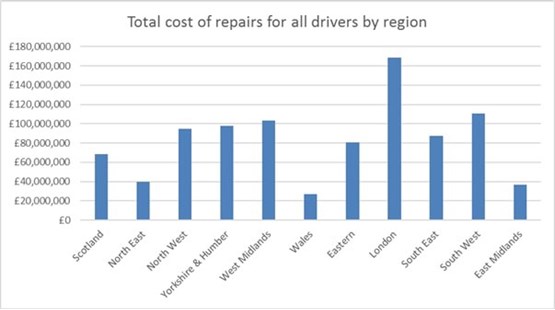 Report casts doubt over Government’s autonomous aspirations due to poor condition of the road network.

Breakdowns that could be attributed to potholes increased by 11% in the last quarter of 2017 compared to the same period in 2016, reveals RAC’s Pothole Index.