BCA breaks one million vehicle sales in one year 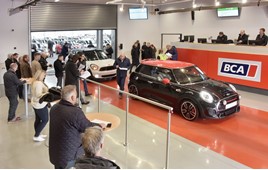 BCA has sold more than a million vehicles in one year in the UK for the first time.

BCA has a network for 24 centres across the UK from Scotland to the South West.

The company operates more than 600 acres of de-fleet sites that manage more one million vehicles a year.

Of the one million vehicles sold by BCA over the past year, more than 900,000 cars were cars, with the balance represented by light commercial vehicles, motorcycles, caravans and motorhomes, taxis, minibuses and small volumes of trucks, trailers, plant and agricultural equipment.

The majority of vehicles sold by BCA are purchased by buyers physically in the auction hall, but a significant 28% are bought by professional online buyers, bidding remotely in real time from a computer or smart device.

Fleet and lease stock sold through BCA in February returned the second highest value on record, with values rising to £10,972.

The remarketing company says that it will add significantly to the facility’s volume and throughput.