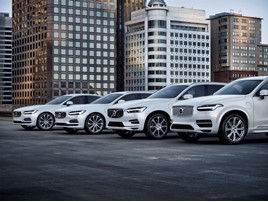 Volvo is to stop offering diesel versions on all new models launched from next year.

Instead, they will be available as either a mild petrol hybrid, plug-in petrol hybrid or battery electric vehicle.

The new S60 saloon – to be launched later this spring – will be the first Volvo to be produced without a diesel engine.

It will initially be available with a range of four-cylinder Drive-E petrol engines as well as with two petrol plug-in hybrid versions. Mild-hybrid versions will follow next year.

Håkan Samuelsson, president and chief executive of Volvo Cars, said: “Our future is electric and we will no longer develop a new generation of diesel engines.

“We will phase out cars with only an internal combustion engine, with petrol hybrid versions as a transitional option as we move towards full electrification.

“The new S60 represents the next step in that commitment.”

He said lower fuel consumption was the “only advantage of diesel,” but that “you can get that back with a mild-hybrid engine”.

Volvo Cars last month reinforced its electrification strategy by stating that it aims for fully electric cars to make up 50% of its global sales by 2025.

The S60’s estate sibling, the V60, was launched earlier this year in Stockholm.

After just five months with Volvo, new head of business sales Steve Beattie is confident he has identified how to increase true fleet sales.

The company has announced its intent for fully electric cars to make up half of its sales by 2025, strengthening its position in China