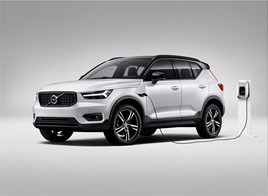 Volvo has announced its intent for fully electric cars to make up half of its sales by 2025.

In 2017 the manufacturer made an “industry-first” move to make all new models released from 2019 as mild hybrid, plug-in or battery EV.

The move to electrify 50% of its cars by 2025 reportedly “positions it as a powerful player in China” as it is the world’s leading market for electrified cars.

Volvo Car’s president and chief executive Håkan Samuelsson said: “Last year we made a commitment to electrification in preparation for an era beyond the internal combustion engine.

“Today we reinforce and expand that commitment in the world’s leading market for electrified cars. China’s electric future is Volvo Cars’ electric future.”

Volvo XC40 road test | it is among best in class

The Volvo XC40 road test reveals that while refined and quiet, the fuel consumption does not make it a frugal choice for fleets