True Fleet market shows second month of growth in May

True Fleet registrations have grown by 0.02% in May, following the first rise in 13 months in April.

The modest increase of 156 registrations – reported by Dataforce - contrasts with strong growth in the Private Market, which showed an increase of 9.3% over May 2017. 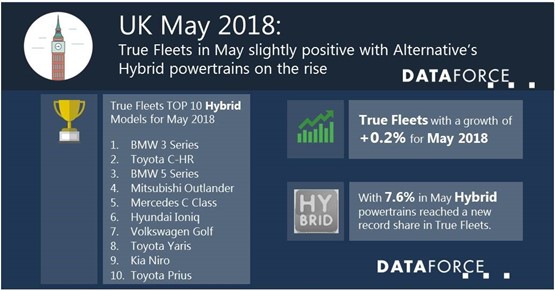 Only four brands in the top 10 were able to increase fleet volume last month, with Volkswagen taking the lead. It’s the first time the German manufacturer has been ahead of Ford and Vauxhall this year.

The most impressive performance came from Seat. It enjoyed growth of 56.2%, this was partly due to the new Arona, but even more to growth for the Leon (+ 70.0%).

Beside the endlessly growing SUV segment (scoring a share of 39.6% in May) the group of Compact Cars is currently stabilising its market share. Not only due to the Ford Focus, VW Golf and Seat Leon but also because of a bunch of models with growth rates far beyond the average like Honda Civic, Hyundai Ioniq, Nissan Leaf and BMW 2 Series.

The Hybrid share in True Fleets reached a new all-time high (7.6%) in May and the share of 0.8% for full electric cars was surpassed only once (December 2015).