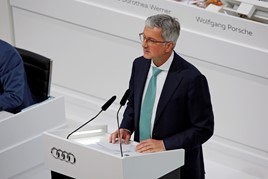 Audi’s chairman and chief executive Rupert Stadler has been arrested as part of the continued investigation into Volkswagen Group’s diesel emissions scandal.

A judge in Germany ordered that Stadler be remanded in custody, it said, to prevent him from obstructing or hindering the diesel investigation.

The prosecutor could not comment further due to ongoing investigations.

Stadler's arrest follows on from Volkswagen Group being fined one billion Euros last week due to the diesel emission tests after accepting responsibility for the “diesel crisis” before public prosecutors in Germany.

The fine - equivalent to £880 million - was imposed by the Braunschweig public prosecutor on June 13 and is one of the highest ever imposed by German authorities against a company.

VW does not plan to appeal the ruling, which came after prosecutors established that the brand had sold more than 10.7 million cars between mid-2007 and 2015 which were fitted with an emissions test defeat device.

Former Volkswagen chief executive Martin Winterkorn has been charged in the US over the diesel emissions scandal.

All new diesel-engined cars fail to meet EU standards in real-world driving for NOx emissions, research by the International Council of Clean Transportation has shown.

Volkswagen Group has been fined £880 million (1 billion Euros) by German prosecutors over its diesel emissions scandal.