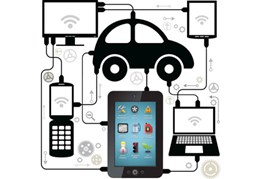 Masternaut has launched a new strategy to concentrate on software rather than hardware, as the fleet industry becomes increasingly data-focused.

The company believes that the future of telematics is about transforming fleet operations by harnessing the power of data.

Currently, it says that less than 2% of the information it is capturing on its telematics devices is being utilised by fleets. But, with increasing connectivity and a shift from pen and paper to digital, it thinks there is an opportunity to leverage data to a much greater effect.

A report released earlier this year suggested the global market for connected cars is expected to grow 270% by 2022.

The findings, from Counterpoint Research’s Internet of Things Tracker service, said major European economies, including Germany, France and the UK, are expected to hit nearly 100% connected car penetration by 2020.

The penetration rate for connected vehicles in the UK currently stands at 31% for cars and 20% for commercial vehicles.

Masternaut thinks that will increase to 80% by 2025, thanks to eCall, which automatically contacts the emergency services in the event of an accident, being mandated in new cars and vans since April.

Dhruv Parekh, Masternaut CEO, said: “In the past 10 years, we have seen lots of technology get deployed in the vehicle to the extent that many of our customers are now overwhelmed by the number of systems they need to log into to keep track of their operations.”

In the next 10 years, Parekh expects further consolidation in the market, leaving just a handful of players to provide a very different service.

In preparation, Masternaut has invested in Catalytix, a team of data scientists, analysts and former management consultants, aiming to drive fleet efficiencies through the power of analytics.

“We have undergone a major restructure over the past three years, investing millions into product development, customer success, leadership teams and IT infrastructure to ensure we are able to deliver best-in-class technologies, excellence in customer service and market-leading capabilities in harnessing the transformative power of data,” said Parekh.

The data being generated is already being used by the team to identify accident black spots in the UK, by examining harsh braking data.

Big data, according to Parekh, could also help organisations choose the right vehicle for the job by allowing fleets to see what good looks like.

The team of scientists took 22 different data points from each of the 250,000 connected vehicles and fed them into a machine-learning algorithm – a form of artificial intelligence – and asked it to figure out what drives mpg.

“The algorithm clustered all of the vehicles into seven different driving patterns that affected mpg,” said Parekh.

This, he explained, could allow a fleet to match a vehicle type with a driving pattern seen in the data to see which model proves most cost-effective.

“There are pretty exciting things we believe we can extract from the data,” said Parekh.

There are already plans to launch a CO2-reporting tool in quarter three, which will benchmark an individual vehicle’s real-world performance, taking into account vehicle type, usage, seasonality and particular industry.

Fuel consumption data is taken direct from the CANbus of the vehicle and measured against other vehicles within the Masternaut fleet.

Parekh said: “We have very real-world benchmarks about what mpg should look like by vehicle in terms of great performing fleets.”

A decade from now, he predicts there will be the equivalent of an app store for fleet technology providers offering a suite of services.

He explained: “If you think about what Apple did with the app store, in terms of making it easy to buy software, we can see a similar trend from technology companies providing a service store where you can buy everything you need to operate your fleet.”

Parekh says this could then provide the opportunity to gain even greater insight from the data of all the different services provided, driving further efficiencies for fleet decision-makers.

BVRLA has published the latest Fleet Technology Report, providing new insight into the status of the connected vehicle market and the impact it is having on the vehicle rental and leasing industry.