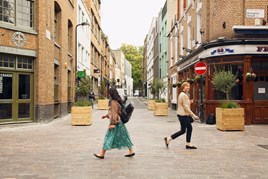 One in five fleet operators say they will pay fines if charged to enter clean air zones (CAZs), rather than replace older vehicles with new, cleaner models, new research suggests.

A third (34%) also said they had no strategy in place to deal with councils introducing charges, while more than half (51%) have vehicles that do not comply with the latest emissions standards.

It is unclear how many councils may decide to introduce CAZs that charge drivers.

Birmingham City Council’s ruling cabinet has approved plans to charge all but the cleanest cars and vans. Leeds favours a charging system for non-compliant buses, coaches, HGVs, taxis and private hire vehicles (pre-Euro 6 diesel and pre-Euro 4 petrol). If approved by Government, both schemes would come into force from January 2020.

Others, including Cambridge, Bristol and Bath could follow suit, while London’s ultra-low emission zone (ULEZ), which will target cars, vans and trucks that don’t meet the latest emission standards, will be introduced from April 2019.

In the annual Operational Fleet Report, published by the AA and BT Solutions, it highlights how a significant majority of fleets have plans in place to deal with potential penalties. However, it also shows that a substantial minority have not yet recognised the potential impact to operations.

“Understanding the complexities of new regulations is vital, but our research underlines industry anxiety around the implementation of the Government strategy, which fleet managers and oper-ators argue will pose significant commercial challenges in the coming years,” he said.

Researchers spoke to 505 key fleet decision-makers and 16 industry experts on clean air and alternative fuels in compiling the report.

The research suggests that the average cost to ensure a fleet is compliant is £256,000, but Gary Harrison, engineering manager at BT Fleet Solutions, said larger fleets, with vehicles on longer replacement cycles, will face “significantly higher” costs, running into millions of pounds. Those larger fleets were also found to be the most prepared for potential restrictions in towns and cities.

Harrison explained: “If you are a smaller operator, say up to 99 vehicles, 40% of them didn’t have a (clean air zone) strategy. Once you looked at the larger fleet operators, who perhaps have a team of people involved in the management of vehicles, that dropped down to just 18%.

“The expectation is the impact is going to be much more significant for the larger fleets and therefore you’d expect them to spend the time and the effort to understand the legislative changes, and prepare for them.”

However, Harrison says fleets of all sizes have suffered from a lack of information as local authorities decide how to best tackle pollution.

He explained: “Until we have that clarity, final strategic plans are difficult to formulate; we’re 15 months away from clean air zones coming into force – the clock is ticking.”

Brace added: “Many in the industry do not feel fully informed about the changes and this lack of clarity presents barriers to compliance.”

The issue for all van fleets, regardless of size, is that they are committed to five to 10-year replacement cycles, explained Brace.

“Compliant Euro 6 diesel engines have only been available for the past two years, and alternative fuels are still relatively new. This means companies with very large fleets will need to replace a lot of vehicles. But it still begs the question – what with?”

Brace is calling for a more collaborative approach. “The fleet industry feels that a wider coalition between motoring organisations and Government agencies will ensure a future that is both environmentally progressive and economically sound,” he said.

Ten months ago, when the Government first announced its plans, BT Fleet Solutions set up an ultra-low emission vehicle (ULEV) working group, involving people from across the whole of the BT Group, with Harrison as chairman.

He explained: “Its purpose was to pull experts from across the whole of BT to look at the legislation, the products, the technology, the charging infrastructure and how it would affect BT Fleet Solutions. That learning, that intelligence and that capability is something that we are now starting to share with our customers.”

Harrison does not underestimate the challenge ahead. “When you look at CAZs and the migration towards alternative fuels, I see this as the biggest fundamental change for a fleet operator in more than a hundred years,” he said.