Highway Code review to focus on cyclist and pedestrian safety 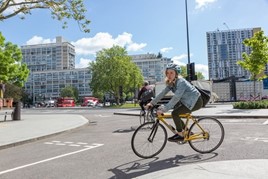 The Government is reviewing guidance on how road users should behave in relation to cyclists and pedestrians, as part of its plan to drive down road deaths.

The new Highway Code will highlight how to avoid the dangers of close passing, and encourage people to adopt the ‘Dutch reach’, a method of opening a car door with the hand furthest from the handle, to force drivers to look over their shoulder for passing traffic.

Cycling and walking minister Jesse Norman said: “Britain has some of the safest roads in the world, but we need them to be safer still for all – and particularly for cyclists, pedestrians and other vulnerable road users.

“Cycling and walking are increasingly being understood as crucial parts of an integrated approach to issues of health, obesity, air quality and town and city planning. But this will only happen if people feel safe on the roads.

“These measures are part of a steady process of improvement and reform designed to achieve just that.”

The review follows the recent publication of road casualty figures showing that 101 cyclists died in 2017 in road traffic collisions.

The Government launched a new UK-wide initiative in June, to help the police crackdown on close passing, which leads to accidents and puts people off cycling.

West Midlands Police are offering drivers a road-side educational input on safe overtaking but repeat offenders - or anyone deemed to have driven dangerously close to a cyclist - can expect to be prosecuted and taken to court.

Joe Irvin, chief executive of Living Streets, said: “This is a major victory. When we walk our streets, we should not have to feel endangered by traffic.

“People walking and cycling do not cause road danger, congestion or toxic air levels, and yet they’re the ones who too often pay the price on our roads. Last year, there was a 5% rise in pedestrian fatalities - this cannot continue.

“A revision to update the Highway Code is needed to make people walking and cycling feel safer, and to encourage more people to choose these cleaner and healthier ways to travel.”

Duncan Dollimore, head of campaigns at Cycling UK, added: “Close overtakes and people opening car doors in front of cyclists are not only dangerous, they also put people off riding a bike.

“That’s why Cycling UK has been campaigning for changes to the Highway Code rules for many years, to make the requirements to give enough space when overtaking a cyclist, wait if you can’t, and look before you open your car door crystal clear.

“We’re delighted the government has listened and we hope to contribute to the discussions regarding the amendments required to prioritise the safety of cyclists and other vulnerable road users.”

The Department for Transport is also publishing an updated national standard for cycling training manual, now with the latest best practice on safe cycling.

In addition, a summary of responses from the ‘Cycling and walking investment strategy safety review consultation’, launched to drive up standards of road safety, will be published. This is an important step in its drive to improve cycling and pedestrian safety, said the Department for Transport.

Meanwhile, Highways England is announcing a £3 million contract with Sustrans to help deliver a national programme of improvements to the National Cycle Network.

In August, the department launched a consultation to look into whether a new offence equivalent to causing death by careless or dangerous driving should be introduced for dangerous cyclists. This consultation will close on November 5, 2018.

Around three-quarters thought that more cycle paths would encourage more people to take up cycling, and more than half thought that cycle training in schools should be compulsory.

Last year there were 18,321 pedal cyclist casualties and 23,805 pedestrian casualties on UK roads.

Rebecca Ashton, head of policy and research at IAM RoadSmart, said: “For us it’s all about segregation, and safe streets for cycling and walking if you want to get cycle usage to really take off.

“IAM RoadSmart has long said that if the Government is serious about wanting to increase the uptake of cycling and reduce the numbers of people killed and seriously injured on our roads, there has to be a long-term approach to a comprehensive cycle path network and it’s good to see the announcement of a £3 million contract with Sustrans which is a step towards that goal.”

O’Donovan Waste and Metropolitan Police have partnered to join HGV drivers and cyclists at a national safety event.