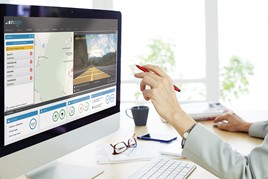 Telematics company Trakm8 has revealed a “disappointing” set of half year results, with revenues down by 38% to £8.8 million.

It is warning that full year revenue is now expected to be 20-25% below that reported during the last financial year, when it was £30.1m. The market had expected a 9% increase in revenue to £32.9m.

Today, the share price had fallen further to 19.25p, giving it a market cap value of £7m.

John Watkins, executive chairman, said: “This is a disappointing set of results. All of the Group's key financial metrics are down in comparison to the prior period and the full financial year ended 31 March 2018.”

“Unexpected lower than usual fleet and optimisation revenues of £1.03m due to lower pipeline conversion than normal, can be attributed to the current financial uncertainty associated with Brexit.”

“There is an ongoing trend of lower service fees per unit for the same functionality,” said Watkins. “This should be the lowest point for recurring revenues as volumes build up over the coming months.”

Despite a record pipeline for fleet contracts, the market has been adversely affected by the current uncertainty over Brexit and the economy in general, he said.

Decision making is taking even longer than previously has been the case. Since March 2018 Fleet units installed have increased by 4,000 units to 77,000 (5%).

“The Group's largest insurance customer has experienced a decline in young driver policies and as a result the level of new policies written has been less than those not renewed or cancelled,” Watkins explained.

“The effect of US sanctions on Iran impacted expected revenues in the period. In addition, the Group's major automotive customer has had a slower roll out than originally expected whilst running down the inventory purchased at the end of the last financial year.”

The new contract wins and the resumption of volume supply to automotive will commence in H2. As a result, insurance and automotive connections reduced by 5,000 to 173,000 (-3%).

Watkins concluded: “We continue to seek to increase the number of connections in order to generate long term, recurring revenues.

“We have outlined our strategy to achieve 1m connections by 31 December 2020 and will continue to monitor this trend as an important KPI.

“Despite the poor six months, we believe that our ambition remains realistic due to the new contract wins and strong commitment from various existing customers.”

Trakm8 is expanding into a new manufacturing facility following a £1.5m investment.

Trakm8 Holdings has announced that it has been awarded an initial three-year contract by LexisNexis Risk Solutions.