Four out of five of motorists think there should be stiffer penalties for drink-driving, with more than half strongly in favour.

When asked in a new poll what measures the Government should introduce if laws were made tougher, a lower or zero tolerance alcohol limit was supported by 43%.

More than a third (35%) agreed that fines should be calculated as a percentage of the driver’s income, according to the survey by AlcoSense Breathalysers.

Just under a third said that an ‘interlock’ should be fitted on the cars of all motorists convicted of drink-driving.  This is a device that stops the car from starting if alcohol is detected on the driver’s breath.

Nearly 30% thought the frequency of breath testing by Police should be increased and that random testing should be brought in.

A similar number said they supported an even more draconian measure - immediate confiscation of a car if the driver is over the limit, with the car then sold to fund road safety campaigns and care for road accident victims.

Other steps included the compulsory carrying of a personal breathalyser in the car (24%), and a ‘name and shame’ public register on the internet of all drink drivers together with their photos (20%).

AlcoSense polled 2,000 drivers who drink alcohol at least once a week. They were asked to select up to three options from a list of potential measures to toughen up drink-driving laws.

“Latest figures show that 220 people were killed on the roads last year where the driver was over the limit, up 30% on the previous year,” said Hunter Abbott, MD of AlcoSense Breathalysers.  “It seems the public now agree that more needs to be done to stamp out drink-driving.

“With Christmas approaching, drink-drive campaigns are not effective enough.  Over half of motorists told us it makes no difference to their attitude to drinking and driving.

“A marketing campaign may help to shape opinions - but tougher legislation is required to really make a difference in behaviour.”

When asked about the drink-drive limit in England and Wales, two thirds of respondents were in favour of reducing it from the current level of 80mg of alcohol per 100mL of blood.

Half of those supported it being brought down to the Scottish limit of 50mg, with the other 50% saying even lower than that.

Nearly half (44%) said that, in addition to lowering the limit, there should be better Police enforcement of that new limit.

The number of motorists in England and Wales found to be over the drink-drive limit last Christmas, including those who refused the test, was 4,816 – a failure rate of nearly 8%. 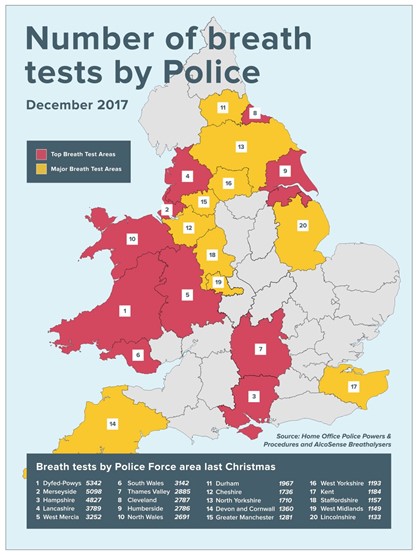 New figures from the DfT show that 9,040 people were killed or injured on Britain’s roads in 2016 where a driver was over the legal limit for alcohol.

Fleet and safety: how can I eliminate drink/drug-driving?

Driving under the influence costs lives. Andrew Don looks at the law and the policies fleet operators should implement

One in 10 employees, who drive as part of their job, regularly get behind the wheel while under the influence of drink or drugs, new research suggests.