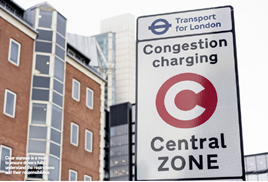 Plug-in hybrid vehicles will no longer be exempt from the London congestion charge after 2021, as part of a new package of measures aimed at tackling congestion and improving air quality.

The Mayor and Transport for London (TfL) have also confirmed that private hire vehicles will no longer be exempt from the congestion charge in central London.

Following a public consultation that received more than 10,000 responses, the changes to the congestion charge include the replacement of the ultra-low emission discount with a new phased cleaner vehicle discount (CVD) that will incentivise only the cleanest vehicles to drive in central London.

The proposals follow the announcement of a new £23 million scrappage scheme to help take the most polluting vans off London roads.

Currently, cars which emit more than 75g/km of CO2 are exempt from the congestion charge. From April 8, 2019, to October 24, 2021, new, tighter standards will be in place for vehicles to qualify for the new Cleaner Vehicle Discount.

From October 25, 2021, to December 24, 2025, only pure electric vehicles will be eligible for the CVD. All other vehicles, regardless of their emissions status, will need to pay the congestion charge, unless they are registered for another discount or have an exemption.

Sadiq Khan, Mayor of London, said: “Toxic air pollution in London is a major public health crisis that is stunting the lung development of our children and leads to thousands of premature deaths and increases the risk of asthma and dementia.

“We have to make tough decisions to protect the health and wellbeing of Londoners and tackle harmful emissions from the most polluting vehicles.

“We’ve prioritised cleaning up our bus fleet and the early introduction of the 24-hour Ultra Low Emission Zone in central London. Now we need private hire vehicles and taxis to play their part and help us clean up our filthy air.”

The changes affecting private hire vehicles are expected to reduce the number of PHVs circulating in the congestion charging zone by up to 8,000 a day.

The new package of measures being proposed by the Mayor and TfL to tackle taxi emissions and support drivers switching to new zero emission capable taxis includes:

Fleet Poll
Would you be willing to share vehicle data as long as anonymity is maintained?
Vote
View all
109