The analysis from the car buying comparison website was based on a sample of 130,000 valuations of up to 5-year old diesel and petrol cars on its site. 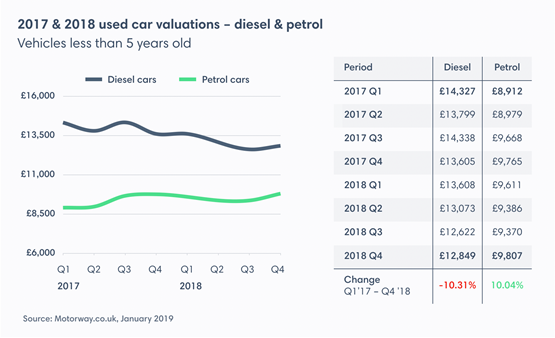 Motorway.co.uk also analysed diesel and petrol valuation data for individual car makes. The research revealed significant differences in how different brands have changed over the past 12 months and two years.

Looking at the most popular makes valued during 2017 and 2018 on the comparison website, most major car brands including Ford, Mercedes and Volkswagen saw diesel price drops, with the biggest falls seen with Land Rover, BMW, Vauxhall and Audi.

The average price of a diesel Audi has fallen 14.3% since the beginning of 2017, compared to a 8.4% increase in price for the petrol variants, it said. 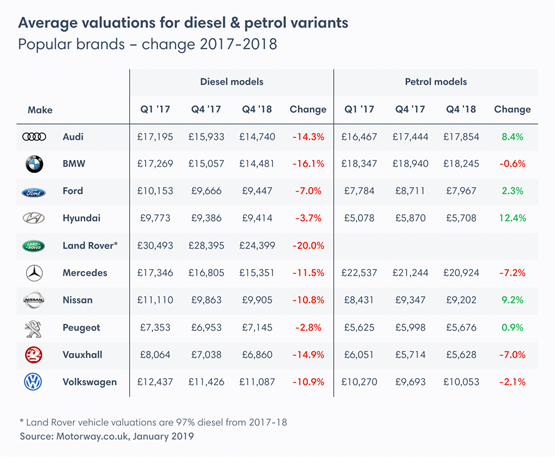 Alex Buttle, director of Motorway.co.uk, said: “Increasingly, people looking to buy a used car are deciding on fuel type before choosing what make and model they want to purchase.

However, the findings from Motorway.co.uk do not tally with the analysis of pricing experts at Cazana (fleetnews.co.uk, December 21).

Rupert Pontin, director of valuations at Cazana, said: “If used diesels were bad news, retail demand would have diminished and retail pricing followed suit and this has not happened and shows little signs of doing so.”

Furthermore, the Vehicle Remarketing Association (VRA) says that new diesel car sales are falling so quickly that there could be shortages of them on the used market (fleetnews.co.uk, January 17).

Philip Nothard, deputy chair at the VRA, said: “The speed of decline in diesel has been much more rapid than the overall market but, generally speaking, demand for used diesels has not really fallen very much at all.”

Despite sales of new diesel cars tumbling by more than 300,000 vehicles in 2018, demand for the fuel is still high in the leasing market, says Vantage Leasing.

New diesel car sales are falling so quickly that there could be shortages of them on the used market, says the Vehicle Remarketing Association (VRA).

Diesel cars made up three quarters (76%) of leased vehicles from Vantage Leasing in 2018, with hybrid and electric cars accounting for almost 7% of orders.