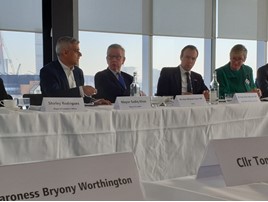 Local authority leaders from around the country have signed up to a wide-ranging plan aimed at significantly cutting air pollution.

The event was organised in partnership with the UK100 group of local authorities and Unicef UK,  the city leaders and environmental groups called for greater Government investment in clean air, the adoption of World Health Organisation air pollution recommended limits and the establishment of a £1.5 billion government-funded vehicle upgrade programme.

The fund would rid Britain’s streets of the dirtiest diesels and petrol vehicles, help businesses upgrade their vehicles and deliver a network of new Low Emission Bus Zones across the country.

Research published by UK100 suggests that this could pay for nearly half a million (488,647) older polluting cars, vans and buses to be taken off the roads and incentivise people and businesses into using low-emission vehicles and public transport.

“Government should work in partnership with local leaders by providing new powers and adequate funding: that will make a real difference to drive urgent and effective action.

“Many councils and mayors are acting, but an extra £1.5 billion is needed to support people and businesses to switch from older polluting vehicles into low emission transport, cycling and walking so we can all love clean air.

“We also a need a new clean air law including tougher, legally binding WHO air pollution limits and an independent watchdog that will hold Government to account.”

Details of the new proposed £25 million car scrappage fund will be revealed later this year.

It comes on top of the Mayor’s existing plans for a £23 million fund to help micro-businesses scrap vans that do not comply with the new Ultra Low Emission Zone standards, but which are driven into the ULEZ central London zone regularly.