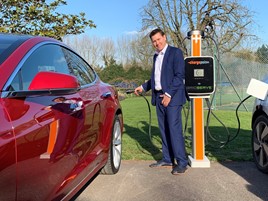 Each ‘Electric Forecourt’ will have dedicated zones for private and fleet vehicles, such as taxis, buses, delivery vehicles and trucks, and will offer sub-30-minute charging times for most vehicles.

The forecourts will be based on a conventional fuel station, featuring the usual range of facilities including coffee shop, fresh food and convenience supermarket.

However, they will also offer customers an airport-style lounge with high-speed internet, which will also serve as an education centre and hub to explore a broad range of electric vehicle solutions.

Gridserve is investing £1 billion in the initiative. Construction starts later this year, including at York and Hull, with the first sites expected to be up and running by early 2020. The full network should be operational within five years.

The company will be building new solar farms to support the Electric Forecourts, each of which will feature multi-megawatt batteries to provide grid services and on-site storage that will support the rapid uptake of EVs and additional renewable energy capacity. Rapid charge facilities will offer up to 500kW capacity, bringing down charging times to less than 10 minutes.

The sites will include up to 24 charging bays, able to simultaneously charge all types of vehicles. Customers will be able to reserve charging slots in advance.

Toddington Harper, CEO and founder of Gridserve (pictured above), claimed the network would make charging an electric vehicle "easier and cheaper than a petrol or diesel alternative", with pricing competitive to home and office charging.

"We have tiered pricing options, ranging from open access contactless payments, to monthly memberships and lower cost pricing per kWh," he said.

"Our mid case for ultra high power charging targets a price of 20p/kWh. We are also able to offer highly competitive bespoke pricing structures for fleet vehicles that will use Electric Forecourts on an ongoing basis."

As an example, 20p/kWh would cost a driver £18 to fill from empty the Jaguar i-Pace, with its 90kWh battery, or £8 to fully charge a Nissan Leaf's 40kWh battery.

Gridserve is also developing an app which will help drivers to plan journeys better, reserve charging slots, and pay for ancillary on-site services such as car washing.

The app will link to loyalty and referral schemes that will reward people with ‘road miles’ for using onsite services provided by Gridserve and its partners, including EV network operator Chargemaster.

Eighty sites have already been secured on busy routes close to towns, cities and major transport hubs. Gridserve hopes to build its solar farms adjacent to the forecourts to ensure that 100% of the electricity is clean and low cost.

Evolt UK has installed its rapid charging units at a purpose-built charging hub that includes solar power and energy storage.