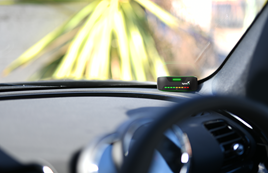 Lightfoot is to launch an initiative aimed at removing the equivalent of 1,000 cars’ worth of emissions from Exeter’s air by the end of the year.

As part of Breathe Exeter, the telematics company aims to install its in-car technology – which retails at £149 - in at least 5,500 vehicles by the end of 2019.

The technology will monitor driving performance and those participants who achieve a Lightfoot score of 85% or above will be awarded ‘elite driver’ status.

They will also be automatically entered into cash prize draws and can enter competitions.

Lightfoot will also soon launch The Drivers’ Lottery which will expand its prize offering.

The company says drivers who install its technology can expect to save an average of £160 per year on their fuel bill, as well as significantly cut emissions.

Mark Roberts, founder and CEO of Lightfoot, said: “Through Breathe, we aim to remove 550 tonnes of pollutants from our city’s air by the end of December.

“To do this, we need just 10% of the city’s cars and vans to install Lightfoot.

“For those joining us on this journey, there is a huge opportunity to make a positive difference – to create a blueprint for other cities to follow, proving that a social movement for change can have a bigger, more immediate impact than slow-moving national policy.

“Together, we can dramatically cut CO2, NOx, and particulates through one simple action - smoother driving.”

He added: “In our eyes Breathe is a ‘now’ solution to the growing global issue of vehicle emissions. Achieve our goals in Exeter and we will set a precedent for others to follow around the globe.”

Activa Contracts has sponsored a new initiative with risk management partner Lightfoot, to incentivise and reward its safest drivers with “a prize a week”.