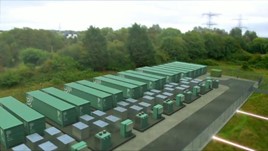 A £41 million Energy Superhub with the power to charge hundreds of electric vehicles at the same time is to be built in Oxford to help “kickstart an EV revolution”.

Money-saving ground source heat pumps will subsequently be installed in around 300 buildings and homes.

Tom Hayes, executive board member for a safer and greener environment at Oxford City Council, said: “The City Council is working towards a Zero Carbon Oxford to tackle dangerous climate change in the time available to us to save the planet.

“Uniquely, this £41m once-in-a-generation downpayment on Oxford will move the Council closer to achieving this vision.

“This exciting project will enable the city council to install more electric vehicle charging points of the kind that charge vehicles quickest.

“It gives black cab drivers additional support to shift from 100% diesel today to 100% electric in the next few years.

“It enables the council to move our own vehicles to electric on a faster timescale and, crucially, to install heat energy across homes to tackle fuel poverty.”

The council will use some of the URKI grant to convert part of its vehicle fleet to electric, with aims to procure new electric vehicles including refuse collection trucks, sweepers, tippers and vans.

The funding will also support the Council to work with a partner offering a ‘Try before you Buy’ programme for Hackney Carriage Vehicle drivers in Oxford.

Pivot Power will initially install approximately 100 ultra-rapid and fast chargers at a public charging station on the A34 and at the council’s main vehicle depots.

The network will also run past the city’s two main bus depots, providing the opportunity for their fleets to go electric.

The University of Oxford, together with a UK university-led energy revolution research consortium dubbed EnergyREV and the Energy Systems Catapult “Energy Revolution Integration Service” (ERIS) will study the project to produce reports and recommendations that will support the rollout of similar initiatives elsewhere in the UK, and around the world.

Matthew Boulton, chief commercial officer at Pivot Power added: “We are providing the power infrastructure needed to kick-start an electric vehicle revolution in Oxford and support the city’s ambitious plans to clean up its air and cut its carbon emissions.

“We’re thrilled that our network will enable the city council to start transitioning its entire vehicle fleet across to electric.

“We are hoping to encourage all sorts of other Oxford groups – residents, commuters, bus companies, logistics operators – to take advantage of the power we are bringing to the south of the city and switch to electric vehicles.

“Together we can make rapid improvements to Oxford’s air quality and turn it into a global showcase of a clean electric city.”

Innolith is developing a 1,000Wh/kg rechargeable battery, which would allow an electric vehicle to travel 1,000km - some 600 miles-plus - on a single charge.