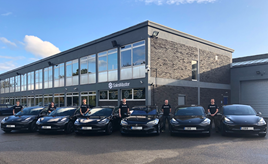 SalesMaster has invested in a new six-strong Tesla fleet for its sales and management team.

Featuring a combination of models, including the Tesla Model S, Tesla Model 3 Standard and Tesla Model 3 Long Range, the new fleet has replaced petrol vehicles with an average CO2 of 116k/km. The vehicles were supplied by ICR Leasing.

Chris Stott, managing director of SalesMaster, said: “We are delighted with the new Teslas.

“We wanted a fleet that would be efficient to run and would also significantly lower our emissions. We need high performance, reliability and the long range, which is particularly useful for our head of sales.”

In anticipation of the new electric arrivals, the company has installed six charging points at our head office and plan to install a further four.

Stott continued: “It’s no surprise that the Model 3 has become the best-selling BEV – we have been deeply impressed with the power delivery and performance.

“We also like the convenience of the app and its ability to control elements of the car, such as setting the heating before you access the car - particularly useful in winter.

“Milton Keynes, where SalesMaster is based, is the electric vehicle capital of the UK and we are delighted to be part of it.”

Founded in 2009, the software specialists offer a portfolio of three main services, namely Fleetbase, Demo Diary and the brand’s flagship Stockbook online platform, currently used by more than 500 dealerships throughout the UK.

Tesla’s new Model 3 has picked up a string of accolades in the Parkers New Car Awards 2020, including Company Car of the Year.